The fire broke out on Garden Lane in the Hunter Hills Apartments in Flemington Borough at 9:17 p.m., according to a post on the Flemington-Raritan First Aid and Rescue Squad Facebook’s page.

Numerous 911 calls to Hunterdon County Communications and initial reports from first arriving Flemington police officers upgraded the assignment to a working fire. Officers further advised that at least one person was injured with serious burns after neighbors assisted the subject from the apartment, authorities said.

First arriving units immediately went to the aid of the injured person and the victim was then transported a short distance to the grass field along North Main Street where a landing zone had been established. The victim was then transferred to the care of the New Jersey State Police NorthSTAR medevac crew and was then airlifted to the burn center at St. Barnabas in Livingston, authorities said.

Command then requested a second-alarm for the fire and rescue squad EMT’s took up stand-by positions around the scene in case of additional injuries. One additional civilian injury was transported to Hunterdon Medical Center, and two first responders were evaluated at the scene for minor injuries, authorities said.

A third-alarm was then requested by command for cover assignments and manpower at the scene. An extensive overhaul was conducted to ensure extinguishment, authorities said.

An aggressive interior attack by the first arriving units held the fire to one apartment and attic area, authorities said.

“All agencies and personnel worked together with the usual cooperation to rapidly mitigate the situation,” authorities said. 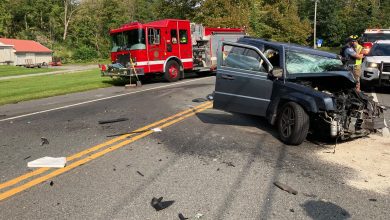