NEWARK, NJ – Two New Jersey men were sentenced to prison Tuesday for their roles in a scheme to bribe mail carriers to steal credit cards from the mail, according to U.S. Attorney Craig Carpenito.

Moussa Dagno, 24, of Harrison was sentenced to 57 months in prison. He previously pleaded guilty before Judge Hayden to an information charging him with one count each of bribery of USPS mail carriers and employees, bank fraud and aggravated identity theft, Carpenito said.

In addition to the prison term, both were sentenced to five years of supervised release and ordered restitution of $87,503 for Olagoke and $84,573 for Araromi.

According to documents filed in the case and statements made in court, Araromi and Dagno recruited at least a half dozen USPS mail carriers and employees to steal credit cards from the mail in exchange for cash bribes, typically $100 per stolen card. Once Araromi had taken possession of the stolen credit cards and activated them, he and Dagno would use the cards to purchase high-end electronics and clothing at various retail stores throughout New Jersey. In February 2018, law enforcement seized six laptops and a smartphone from the Harrison residence then shared by Araromi and Dagno, all of which had been purchased with the stolen credit cards.

Several USPS employees who accepted bribes from Araromi and Dagno have already pleaded guilty to bribery charges, including: former mail carriers Zenobia Gilmer, Ayesha Troztz and Kyanne Costley, who had delivery routes in Mount Arlington, East Orange and Elizabeth; and Jennel Williams, who formerly worked as a clerk in the Newark Main Post Office, Carpenito said.

All four admitted to stealing credit cards from the mail and delivering them to Araromi or Dagno in exchange for payments, and all are awaiting sentencing. A fifth mail carrier from Jersey City, Jacquan Miller, has been charged by complaint for his role in the scheme, Carpenito said. 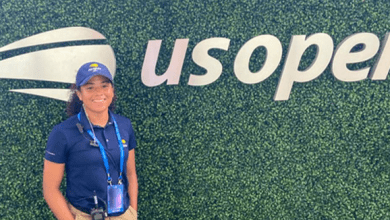 US Open serves up career experience for Centenary University student