NEW JERSEY – The Division of Fish and Wildlife announced Friday two new record fish; one for saltwater and one for freshwater, officials said in a statement.

Daniel Sandorff of Port Murray, NJ, harvested the new state record Grass Carp (archery) on May 27, 2020. The fish weighed in at 76 pounds and 11 ounces. It weighed 10 pounds, 13 ounces more than the previous record. The fish measured 52 inches in length and had a 32.5 inch girth.

Daniel was bowfishing from a boat on the Delaware River when he harvested the fish. He was using an RPM Nitro bow with an RPM-MI reel and RPM red line. The tip was an RPM Turbo.

Ed DiMarcantonio of Wayne, PA, reeled in a new state record Smooth Dogfish on May 31, 2020. The fish weighed in at 22 pounds and 0 ounces eclipsing the old record by 2 pounds, 4.8 ounces. The fish measured 51 inches in length and had a 29-inch girth. Ed was fishing from the Strathmere Beach when he landed the fish.

Ed was using a Lamiglas Super Surf 11′ rod with a Van Stall 250 reel and 40-pound braided test when the fish hit. A bunker served as the bait. 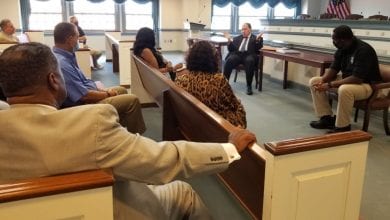