Ahead of President Biden’s first State of the Union Address on March 1, the groups, led by the NJ Audubon Society and Sierra Club, sent letters to U.S. Representatives Andy Kim (NJ-03), Mikie Sherrill (NJ-11) and Tom Malinowski (NJ-07) and urged them to do all they can to elevate climate action ahead of the president’s address to the nation.

In the letters, the groups, representing thousands of New Jersey residents, wrote that addressing the climate crisis has never been more urgent. They called on Reps. Kim, Sherrill and Malinowski to push President Biden to include climate action as a pivotal topic in his address.

The letters read, in part, “The people of New Jersey are being battered by the impacts of climate change-related extreme weather, with storms becoming more frequent, more damaging, and more deadly every year. A recent report issued by the scientists at the National Oceanic and Atmospheric Administration (NOAA) detailed more than 20 extreme weather events in 2021 that resulted in lost lives and damages exceeding $1 billion each. New Jersey was affected by four billion-dollar disasters with an estimated cost of up to $5,555,500 and a combined 50 deaths and injuries. These numbers are only going up.”

In 2021, Hurricane Ida devastated New Jersey, causing at least 30 people to die. Most of those deaths were due to flashing flooding because the infrastructure in New Jersey could not handle the level of rain caused by the storm. 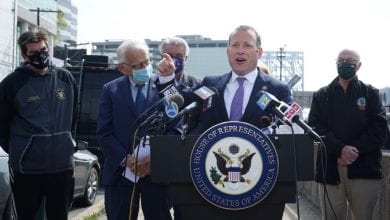 Man caught with knife and marijuana in Readington Twp.