The illegal drug manufacturing enterprise was dismantled in March 2020 as a result of an investigation led by the New Jersey State Police (NJSP) Trafficking North Unit, working within the NJSP Opioid Enforcement Task Force (OETF).

Angel Ramirez, 36, of Hazelton was sentenced to seven years in prison by Superior Court Judge Marilyn C. Clark in Passaic County on August 26. Ramirez pleaded guilty to first-degree maintaining or operating a controlled dangerous substance (CDS) facility on July 19. Under the plea agreement, Ramirez was sentenced as a second-degree offender.

Ramirez is the one of five defendants convicted on charges related to the operation of an opioid mill which was being run from a residence on 9th Avenue in Paterson and served as a distribution point for narcotics in the area. During the execution of a search warrant at the residence in March 2020, 497 bricks (24,850 folds) of heroin/fentanyl, 600 grams of unpackaged heroin/fentanyl, and packaging paraphernalia were recovered.

The following three defendants previously pleaded guilty and were sentenced for their role in the operation:

The fifth defendant convicted in the illegal enterprise, Ricky Rodriguez, 37, of Paterson pleaded guilty to first-degree possession of CDS with intent to distribute on June 18, 2020. He is currently a fugitive from justice.

The mill operators allegedly distributed their narcotics in wax folds stamped with brand names that have been linked to 22 total suspected overdoses across New Jersey, including 14 fatal overdoses, according to NJSP reports.

“­By dismantling this drug mill and putting its operators behind bars, we have cut off a major source of illegal fentanyl and heroin from reaching the streets of Paterson,” Platkin said. “The prison sentences we secured for these defendants demonstrate our resolve to protecting the public and holding drug traffickers accountable for the harm they inflict on communities throughout our state.”

“Each time we lock up a drug manufacturer and seize bulk quantities of heroin and fentanyl we are potentially saving lives that likely would have been lost to overdoses,” said Director Pearl Minato of the Division of Criminal Justice. “Our continued collaboration with law enforcement partners in successful drug takedowns like this one bring us closer to our goal of ending the grip of heroin addiction and the violence it brings to our communities.”

“Since its inception in October 2018, the New Jersey State Police Opioid Enforcement Task Force has seized more than $29.7 million worth of narcotics, money which would have been used to enrich criminals and further fund their production mills; but more importantly, this seizure prevented more than six hundred thousand potentially lethal doses of narcotics from reaching our communities,” said Colonel Patrick Callahan, Superintendent of the New Jersey State Police. “The State Police will continue to work with our law enforcement partners to utilize innovative investigative techniques and strategies to fight the opioid epidemic and ultimately save lives.”

During a two-month investigation, detectives from the NJSP Trafficking North Unit, working within the OETF, determined that an opioid mill was being operated from the 9th Avenue residence.

On March 6, 2020, detectives from the New Jersey State Police Trafficking North Unit, along with members of the State Police T.E.A.M.S, K9, and Hazmat Units executed a search warrant at the residence. In addition to the drugs recovered, detectives seized 11 different stamps used to brand packaged narcotics, cutting agents, several cellular phones, and sifters and grinders, which are all consistent with a narcotics production facility. Drug traffickers market their “brand” of drug by ik-stamping the outside of a wax fold with a unique image, word or phrase. 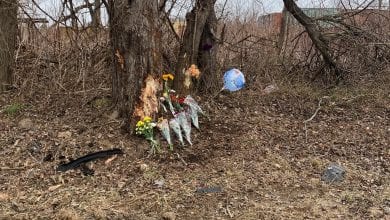