NEW JERSEY – Attorney General Gurbir S. Grewal Tuesday announced proposed changes that, if adopted, would bring more accountability to the youth justice system in New Jersey, transferring juvenile parole responsibilities to the authority of the Juvenile Justice Commission (JJC) and allowing parole decisions to be made by those who are most closely involved in the day-to-day rehabilitation of youth.

Integrating juvenile parole release authority within the JJC completes the consolidation of executive branch juvenile justice responsibilities originally envisioned when the JJC was legislatively established more than 25 years ago. The proposed rules underscore and reflect New Jersey’s commitment to maintaining a truly separate system of justice between adults and youth.

And this shift also joins New Jersey with 32 other states that place release authority with the jurisdiction’s youth corrections agency. Overall, this change allows those who are most closely involved in the day-to-day progress of youth, JJC professional staff, to make and execute decisions regarding parole.

“With today’s proposed rules, our Juvenile Justice Commission continues to push forward towards the systemic transformation of New Jersey’s youth justice system,” said Attorney General Grewal. “Placing release responsibility entirely with the JJC and those most closely involved with our young people ensures that the focus remains on rehabilitation, personal growth, and fairness – priorities that have made New Jersey a leader in youth justice reform.”

“Every step in the reform of New Jersey’s youth justice system has been carefully implemented to create a fair and just structure that recognizes the individual needs of youth while ensuring consistency and equity in decision-making. The standardized parole processes being put in place by the JJC incentivize prosocial behavior and engagement in rehabilitative programming and increase positive outcomes among youth,” said Jennifer LeBaron, Ph.D., Acting Executive Director of the JJC. “The core principles and data collection requirements that we are embedding in our work will allow us to measure the outcomes of these changes. While there is more work to do, the JJC, in partnership with advocates and stakeholders, is creating a system that is more equitable and transparent and that expands opportunities for growth and success among youth.”

The JJC has implemented a team approach to release decision-making. Staff from various disciplines directly involved with youth assess each youth’s behavior and progress and craft reports that are shared with various partners including the courts, prosecutors, and defense attorneys. These reports, as well as specific recommendations regarding parole, are also provided to a review panel authorized to make parole decisions, in order to create individualized reentry plans and to set release conditions consistent with each youth’s specific circumstances and rehabilitative goals. The panel is comprised of at least two members from the JJC and one member of the State Parole Board.

In order to fully implement this change, the JJC’s Executive Board voted to readopt rules with proposed amendments related to P.L.2019, c.363, signed by Governor Murphy in 2020, which transfers administrative functions related to juvenile parole from the State Parole Board to the JJC. Additionally, the law calls for principles that include utilizing objective criteria, processes, and tools to be incorporated into the juvenile justice system and specifically requires such objective processes to be used to determine the length of time a juvenile should remain in custody. This system will enhance fairness and consistency in decision-making, as youth displaying similar behaviors will receive similar parole outcomes.

The JJC’s Office of Juvenile Parole and Transitional Services provides supervision and support to youth once released from custody, assisting them with enrolling back into school, finding employment, and connecting with appropriate counseling and related services, in accordance with the individualized reentry plan. Youth and their families are active partners in the community reentry planning process.

The transformation of New Jersey’s juvenile justice system has earned the JJC national acclaim and made New Jersey a model state for youth justice reform.

The proposed new rules, which were published in the NJ Register on December 21, 2020, are now subject to public comment.

The proposal, and information on how to submit a comment by February 19, 2021, can be found here. 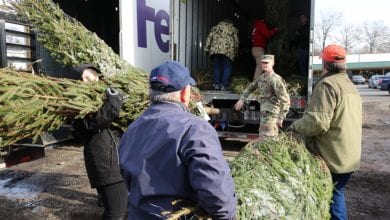 Donate a Christmas Tree to a military family