On March 9, at 9:44 p.m., a township observed a black SUV in the Village Green Apartment complex attempting multiple times to back out of a parking spot. The officer continued to observe the vehicle failing to maintain a lane and failing to stop at stop signs as it exited the complex, police said.

The officer then observed the vehicle fail to use a signal as it traveled on Route 46, then continued on the highway in the middle of the roadway, failing to maintain a lane, police said.

The officer stopped the vehicle on Route 46 and came in contact with the driver, who was identified as Christian Adams. The officer immediately detected an odor of alcoholic beverage and observed obvious signs of impairment, police said.

Adams performed standardized field sobriety tests and upon completion of the investigation, he was arrested and transported to police headquarters where he submitted to chemical breath testing, police said.

Adams was charged with DWI, failure to maintain a lane, reckless driving, failure to stop, unregistered vehicle, failure to possess registration and insurance card and uninsured motor vehicle. He was released to a sober driver pending a court appearance, police said. 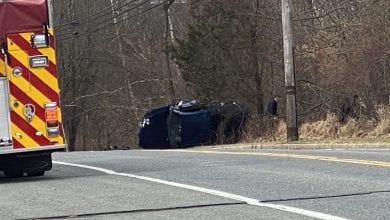