NEW JERSEY — April is Underground Damage Prevention Month in New Jersey. A proclamation from Governor Phil Murphy was presented at the April Board Meeting of the New Jersey Board of Public Utilities (NJBPU) to bring attention to safety protocols surrounding excavation.

The proclamation highlights the Underground Facility Protection Act that requires excavators and facility operators to participate in the State’s One Call system, also known as “Call Before You Dig.”

“New Jersey has one of the nation’s strongest and safest underground damage prevention programs – our plan is to keep it that way,” said Joseph L. Fiordaliso, President of the New Jersey Board of Public Utilities. “We implore you to notify the Call Before You Dig system prior to excavating to keep the public safe and to prevent serious injury or worse. By calling 811, you also help to protect underground infrastructure, especially pipelines, wires and cables.”

Underground Damage Prevention Month is part of National Safe Digging Month, a national initiative recognized by the U.S. Department of Transportation that takes place every April. It is intended to increase awareness of underground utility line safety precautions and reduce the risk of infrastructure damage.

Awareness is particularly important because, as the March 2019 national survey conducted by the Common Ground Alliance (CGA) points out, 40 percent of homeowners who plan to dig this year will put themselves and others at risk by not calling 811 before starting. 811 is a free service.

Excavations are the leading cause of damage to underground infrastructure.

The law requires anyone who plans to dig to provide at least three business days’ notice before excavation, by calling 811, the New Jersey One Call Center.

NJBPU has direct oversight of the New Jersey One Call Center, which operates 24 hours per day, seven days per week and is essential to avoid serious injuries, service disruptions, and costly repairs to critical utility services. It receives more than 700,000 calls each year resulting in over three million “mark outs,” in which the location of an underground facility is marked by a flag or other symbol.

Homeowners are encouraged to take the following steps whenever you are planning a digging project:

When someone calls 811, the New Jersey One Call Center informs the owner of the nearby underground infrastructure. The owner (e.g., a utility) then visits the site and marks the underground facilities where the digging will take place. Respect the marks and dig with care by hand digging within two feet on either side of any marked facility. 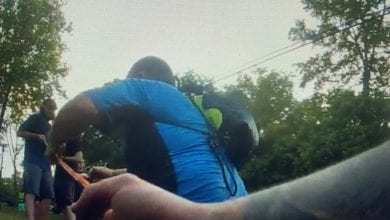