HACKETTSTOWN, NJ (Warren County) – Unconventional presidential inaugurations are nothing new to Bruce Murphy, Ed.D., who was officially inaugurated Thursday as the 14th president of Centenary University in a ceremony held virtually due to the ongoing pandemic. In 1984-85, Dr. Murphy, who was then serving with the US Army, was on the inaugural committee for President Ronald Reagan.

Prior to President Reagan’s inauguration for a second term, weather reports predicted that an Arctic blast could bring wind chills of 20 degrees below zero to Washington, DC—potentially dangerous conditions for a ceremony traditionally held outside on the steps of the Capitol. Two days before the event, Dr. Murphy’s team contacted the Army’s Northern Warfare Center in Alaska, which determined that the severe weather could cause casualties.

“With one day’s notice, we moved the inauguration indoors to the Capitol Rotunda,” Dr. Murphy, a retired lieutenant colonel, recalled during his inaugural address yesterday. In planning his own inauguration, which he had originally hoped would be in person, he reflected on President Reagan accepting the change in order to save lives. Then, he thought about the Centenary University Class of 2020 and their parents, who had a virtual commencement to help save lives in the midst of the pandemic. “How could I do anything less for my own inauguration?” Dr. Murphy said in his address.

Dr. Murphy assumed the presidency of Centenary University on Jan. 1. 2020, less than 60 days before the pandemic halted in-person instruction on the nation’s college campuses. Top priorities during his tumultuous first year were ensuring that Centenary students not miss a day of instruction during the pandemic and the return of in-person classes for the fall semester. A new program called Centenary Choice now gives students the option of attending classes fully in-person, online, or in a HyFlex format combining the two. Thanks to stringent COVID-19 mitigation efforts, the University completed in-person instruction, as planned, on Nov. 24, and has now started the spring semester under the Centenary Choice model.

Noting these successes in his inaugural address, Dr. Murphy thanked Centenary faculty and staff for going above and beyond: “These efforts allowed us to keep our team intact, without furloughs, without pay cuts, and without layoffs. Through it all, we have continued to do the business of the University.”

Other accomplishments during Dr. Murphy’s first year at Centenary include advancing a new strategic plan to establish the University as the intellectual, economic, and cultural heart of the Skylands region, as well as several new academic programs, partnerships with other institutions of higher learning, and a Diversity, Inclusion, Belonging Advisory Board at Centenary: “In short, my vision for the University is the encouragement of a more collaborative, supportive, forward-thinking, and strategic community that embraces lifelong learning, greater access to higher education, and pathways to career opportunity.”

New Jersey Gov. Phil Murphy headlined a host of dignitaries providing video addresses for the inauguration. “Leading an institution of higher education comes with its own set of challenges, but no one anticipated the unprecedented challenges that presented themselves almost immediately upon your tenure. What a way to start!” said the governor, who is no relation to Dr. Murphy. “With your lifelong love of learning and understanding of the power education holds to change the course of a person’s life, we wholeheartedly welcome you to our New Jersey family. From one Murphy to another, we’re proud to have you with us and Centenary University is lucky to have you.”

Other speakers included many of the state’s university presidents, as well as representatives of Centenary’s Board of Trustees, faculty, students, and alumni, and Dr. Murphy’s family, including his wife, Jeanne, and daughter Alondra Murphy Howard. His mentor, Jack Hawkins, Jr., Ph.D., chancellor of Troy University, noted, “The shadow of an institution never exceeds the shadow of its leader. For all in attendance today, rest assured that Centenary has appointed a transformational leader who casts a long shadow…I have no doubt that under Bruce Murphy, Centenary’s brightest days are ahead.”

Dr. Murphy ended his inaugural remarks echoing President George Washington on his inauguration day, when he eschewed a military escort to walk to the ceremony in New York City. Thanking those who have supported him, Dr. Murphy said, “In closing, I say to you, with the goodwill of the Centenary community and the loving support of so many of you—friends, family, colleagues, and mentors—I certainly need no finer escort as we start the journey together.” 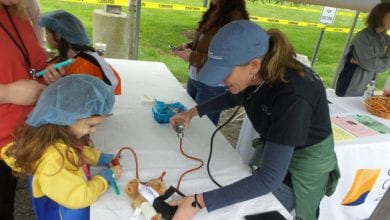