On January 20, shortly after midnight, police received a call from a town resident that a bear had attacked his dog at around 10:00 p.m. and that his dog had succumbed to its injuries, police said.

According to police, Mr. Pierce of Layton Lane stated he let his 5-year-old Yorkie, Tommy, out to go to the bathroom in the backyard and didn’t return when he was called. Pierce then walked out back and observed bear tracks and blood in the snow and found his dog laying mortally wounded by the woodline.

Pierce brought his dog to the animal hospital, but they were unable to save him due to his injuries. He believed that there were claw marks on the dog’s side which caused internal injury and ultimately caused the death of his dog, police said.

Officer Taylor May responded to the Pierce’s residence and confirmed that there were bear tracks and blood which led into the woods. He was unable to locate any bear at that time, police said.

The State Fish and Game Department was notified and will do a follow-up investigation into this attack, police said.

On January 3, an 81-year-old woman was injured and her dog was killed in a bear attack on Echo Drive in Sparta Township.

“It is unknown at this time if it is the same bear that is responsible for these attacks, but it is in the same area that a bear may consider its range,” police said. 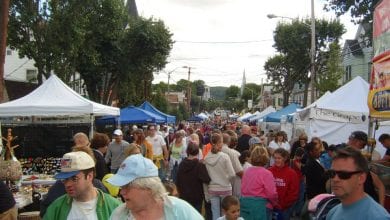