HACKETTSTOWN, NJ (Warren County) – “I can’t breathe” was among the many phrases, chanted by approximately 50 protesters outside of the Hackettstown Municipal Building and Police Department on Stiger Street  earlier this afternoon.

The protest, in response to the recent killing of George Floyd in Minneapolis last week, was organized by Hackettstown resident, Morgan Breeding.

After gathering for roughly an hour in front of the Municipal Building, the group made their way down Stiger Street to Main Street.Multiple Hackettstown Police officers accompanied the group to assure their safety and block traffic.

The protesters, including Breeding, remained at peace with the police during the entire gathering. Also, only 1 counter protestor arrived at the march. That individual wore a mask, remained socially distanced, and flew a large American flag.

Also, a majority of the protesters said while there are concerns about the spread of Covid-19, they felt standing up for their beliefs was more important. 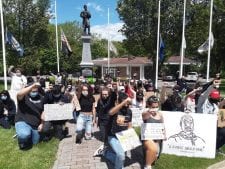 Among the protesters, was Hackettstown resident Brenda Pederson. Pederson says while most police officers are good, she’s protesting against the ones that she says are bad. “They hurt people for no reason,” said Pederson.

However, when asked specifically about the Hackettstown Police Department, Pederson replied, “All the police officers I’ve met in Hackettstown have been nice and kind. To be fair I’m a white woman, but my husband is Hispanic and he’s never had any problems in town.”

Once the protesters reached the 5 corners intersection on route 46, they paused for a moment of silence.After a few brief remarks from members of the group, the protesters disbanded at approximately 3 p.m. 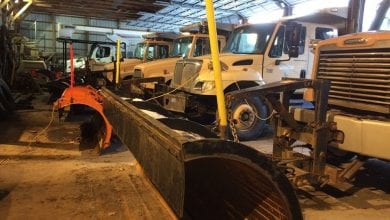