HACKETTSTOWN, NJ (Warren County) – A Sussex County woman is facing several charges including DWI after she crashed into a utility pole last week in Hackettstown.

The crash happened on Sept. 19 at around 7:40 p.m. at the intersection of Mountain Ave and Route 46. It was allegedly reported to police that driver was repeatedly ramming a sign and a telephone pole with the car, police said.

When officers arrived on scene, the vehicle was observed against the telephone pole and a sign. While the officer was talking to the driver, who was identified as Gilmore, the officer allegedly detected the odor of an alcoholic beverage, police said.

Through a police investigation, it was determined that Gilmore was travelling north on Mountain Ave in a 2003 GMC Yukon when she turned right, struck a curb before hitting a street sign and a telephone pole, police said.

Gilmore then attempted to back up and leave but continually struck the sign and telephone pole before exiting the vehicle, police said.

Gilmore suffered a facial injury and was transported by Hackettstown Rescue Squad to Hackettstown Medical Center.

Gilmore was charged and then released pending a court appearance. 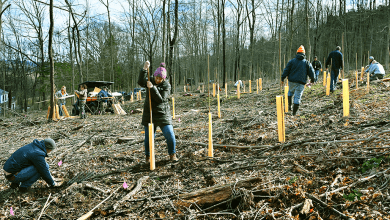 FirstEnergy to donate more than 1,600 trees across New Jersey in 2022