On May 21 at around 3:18 p.m., the Hackettstown Police, Hackettstown Fire Department and Hackettstown Rescue Squad responded to 5 Route 57 in reference to a structure fire, police said.

When officers arrived on scene, the officers observed smoke coming from the second story window of the residence, police said.

An officer suffered smoke inhalation and a firefighter suffered a minor injury. The firefighter was transported to Hackettstown Medical Center and has since been released, police said.

The investigation conducted by the Hackettstown Detective Bureau, Mount Olive Township Fire Marshal and Warren County Fire Marshal ruled the cause of the fire as undetermined and not suspicious at this time, police said.

Route 57 was closed between Route 182 and Herbert Ln for approximately 1 hour. 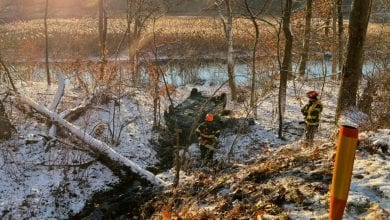 No injuries after car goes down embankment in Byram Township