“Our infrastructure here in New Jersey is in desperate need of repair — we need this bipartisan infrastructure bill and we need it now,” Gottheimer said. “The American Society of Civil Engineers gave our state’s infrastructure a D+ rating. Our roads are the third worst in the country. I spoke with hard working men and women of labor today about the negative impact our failing infrastructure is having on their lives, and how they are the key to fixing it. But this bill won’t only fix our potholes and help cut commute times, finally build the Gateway Tunnel, invest in climate resiliency and electric vehicle infrastructure, it will also create millions of good paying union jobs in the process. With millions of jobs on the line and our infrastructure crumbling, we just can’t afford to wait months to start creating these jobs and improving our communities.”

In a statement earlier today, Gottheimer also said, “We have the votes to pass this legislation right now, which is why I believe we should first vote immediately on the bipartisan infrastructure package, send it to the President’s desk, and then quickly consider the budget resolution, which I plan to support. We need to get people to work and shovels in the ground,” Gottheimer said.

“Our members appreciated speaking with Congressman Gottheimer this morning.  Josh knows what LIUNA knows: that our nation’s infrastructure is in terrible disrepair and that Congress has the chance to pass– with bipartisan support—an historically-important infrastructure bill which finally funds improvements and repairs to our roads, bridges, rails, and water systems—things we all rely on every day.” said Raymond M. Pocino Vice President – Laborers International Union of North America, Eastern Regional Manager “Both Congressman Gottheimer and LIUNA also know that it is reckless to use this legislation as leverage in a game of political chicken. The bipartisan Infrastructure Investment and Jobs Act already has the support of enough people in Congress as well as the support of the American people.  We need the House of Representatives to pass the Infrastructure Investment and Jobs Act now and we are grateful to Congressman Gottheimer for helping to lead the charge.”

The current version of the Infrastructure Investment and Jobs Act, which the House should take a standalone vote on as soon as possible, New Jersey will receive major investments in our infrastructure, including: 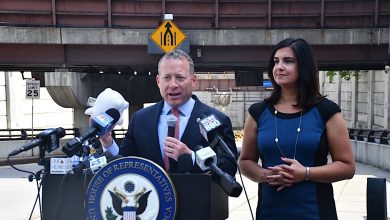 Gottheimer raises alarm on proposed NJ tax on financial transactions that will drive jobs, money out of state