MAHWAH, NJ (Bergen County) – U.S. Congressman Josh Gottheimer (NJ-5) Tuesday stood with the Building & Construction Trades of Bergen County and International Brotherhood of Electrical Workers (IBEW) Local 164 to sound the alarm on how a new financial transaction tax being considered by the New Jersey State Legislature will force the New York Stock Exchange back-end facility and other financial data processing centers throughout New Jersey to move out of the state, cost the Fifth District hundreds of jobs, and cause a multi-million dollar loss in local tax revenue.

“I’m here today for one simple reason: this proposed financial transaction tax will cost the Fifth District at least two hundred good paying jobs, including the hardworking men and women of labor, it will force a key sector out of our state, and it will cost our local community significant revenue, two million dollars a year in property taxes, at a time when we certainly can’t afford it,” Gottheimer said.

“As soon as the state imposes this new tax, the back-end of the stock exchange here in Mahwah, and all the banks that have a presence here, will move, in unison, to a new location out-of-state. This isn’t a guess. It’s not conjecture. The New York Stock Exchange has told us, in no uncertain terms, that if we are the only state that decides to tax financial transactions, they’ll have no choice but — for competitive reasons — to pack up this data center behind us, and all the jobs, and move to their existing center in Chicago. That is something none of us can stand for,” Gottheimer said. 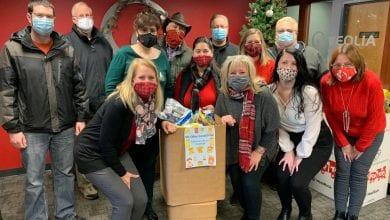