Today’s announcement included updates on initiatives designed to ensure, among other things, that police are held to the highest professional standards; that use of force is monitored and governed by the strongest policies; that officers are trained to de-escalate situations involving individuals in crisis; and that the State responds immediately to major civil rights incidents that threaten police-community trust.

The reforms announced today are an outgrowth of the “Excellence in Policing” initiative launched by Attorney General Grewal and other law enforcement leaders in December 2019.

“Fixing a system that is fundamentally broken requires us to acknowledge the erosion of trust between communities of color and law enforcement,” Murphy said. “From day one, my Administration has been committed to bringing transformational change to community policing and police culture in New Jersey. Under Attorney General Grewal’s leadership, we will take further steps to build upon our progress and deepen the well of trust in our communities, including the first update of our use-of-force policies in two decades. ”

“The tragic killing of George Floyd reminds us that our country has a long way to go, not only in healing our nation’s racial divides, but also in addressing the systemic and implicit biases that affect all Americans,” Grewal said. “Long before this week’s protests, we committed ourselves to making New Jersey a national leader in policing reform. And we’re in this for the long haul, not because it’s easy or popular, but because it’s the right thing to do.”

Expanding “Crisis Intervention Team” Training. Experts agree that one of the most effective ways to reduce police use-of-force and death-in-custody incidents is by expanding the use of Crisis Intervention Teams (CITs), which help officers respond to situations involving individuals with mental health issues. However, CIT training is expensive and typically available only from a handful of outside vendors. To reduce the barriers to entry, the Attorney General’s Office is exploring the capacity to build a statewide CIT training program. As a first step, the state will launch a pilot program, using an outside vendor, with police departments in Atlantic City, Paterson, Trenton, and Millville, as well as New Jersey State Police Troopers assigned in Trenton.

Endorsing Statewide Certification for Police Officers. In December 2019, as part of the “Excellence in Policing” initiative, Attorney General Grewal asked the Police Training Commission (PTC) to consider implementing a statewide professional licensure program for police, as well as a framework for enhancing all police training. That analysis is nearly complete, and a proposal for a statewide program will be presented to the PTC later this month, with support from Attorney General Grewal.

Updating Use-of-Force Policy. The Attorney General’s Office has not updated its use-of-force policy in two decades. In December 2019, Attorney General Grewal announced that the Office of Public Integrity & Accountability (OPIA) would undertake a comprehensive evaluation of the use-of-force policy. Today, Attorney General Grewal announced that he will issue an AG Directive by the end of 2020 that will revise and update the policy for all 36,000 law enforcement officers in New Jersey. In developing the policy, he will consult widely with stakeholders and draw on data collected through the new Use of Force portal.

Division on Civil Rights (DCR) Incident Response Team. Unlike the federal government, New Jersey currently lacks a team of community-relations specialists who can respond in the community following a major civil rights incident. The Attorney General’s Office intends to develop such a team within DCR in the months ahead.

Leaders involved in the CIT training pilot program responded to the announcement today:

“The CIT-NJ program plays a critical role in helping to deescalate challenging circumstances, which is particularly important for the individuals with mental health conditions who we serve and who may interact with law enforcement and the criminal justice system,” said Commissioner Carole Johnson of the New Jersey Department of Human Services, which funds CIT-NJ through the Division of Mental Health and Addiction Services. “We look forward to continuing to work with the Attorney General on this valuable tool to help connect people to care and build trust with the communities most in need of support.”

“I want to thank Attorney General Grewal for the collaborative plan to expand the CIT-NJ Center of Excellence Program here in New Jersey,” said CIT-NJ Director Edward C. Dobleman. ”CIT-NJ is an evidence-based program which is based on community partnerships of law enforcement, mental health and addiction professionals, county resources, and other front line professionals on how to de-escalate many different crisis situations. CIT-NJ Center of Excellence was started in 2007 in Camden County and is now active in 18 of our 21 counties. With this new plan and partnership, we here at CIT-NJ are excited to expand our program and bring the program to our New Jersey State Police as well as a new pilot program focusing on several New Jersey Police Departments to further educate and implement new evidence-based crisis intervention while bringing our communities together during these difficult times. We have some of the greatest trained first responders here in New Jersey and the CIT-NJ Center of Excellence program will only enhance this while building and uniting our communities. Thank you and we look forward to the collaboration.”

“Our law enforcement officers are charged with the service and protection of all the citizens of New Jersey, and this training will equip them with additional tools to assist those experiencing a mental health crisis,” said Colonel Patrick J. Callahan, Superintendent of the New Jersey State Police. “I am proud to join our state, local, and medical partners in this crucial training initiative, and I am confident that it will enhance our ability to provide a greater level of service to our communities.”

“The Passaic County Crisis Intervention Training has provided officers with invaluable training in how to de-escalate highly charged situations with professionalism and empathy,” said Passaic County Prosecutor Camelia M. Valdes. “We look forward to focusing our efforts and experience to pilot a program in the City of Paterson. CIT training will be an invaluable tool for Paterson Police Officers and will benefit community members when they engage with law enforcement.”

“I would like to take this opportunity to personally thank the Attorney General for recognizing the importance and value of CIT training and its impact on the lives of first responders and the communities they serve,” said Paterson Public Safety Director Jerry Speziale. “The 20 spots afforded our agency will provide critical training in the area of crisis intervention, so vital to developing a culture of tolerance, understanding and cooperation between law enforcement, mental health professionals and those in the community struggling with mental illness. By working collaboratively and engaging stakeholders with diverse perspectives, we can approach the way we interact with those in our community dealing with mental health issues in a way that results in stronger police-community relationships and improved outcomes.”

“I am proud to collaborate with the Attorney General to bring such a progressive program to New Jersey,” said Mercer County Prosecutor Angelo J. Onofri. “The most effective police officer is a highly-trained police officer, and we know that law enforcement is often the first to interact with those with mental illness. There are many challenges to these interactions, and by expanding our officers’ knowledge of mental health and providing them with the skills to respond to those in crisis, we can advance public safety and reduce the stigma commonly associated with mental illness.”

“The ability to quickly recognize the signs and symptoms of mental illness is critical for Atlantic City police officers,” said Chief Henry White Jr. of the Atlantic City Police Department. “With a large homeless population, officers are routinely interacting with individuals who are experiencing mental illness or a substance abuse disorder. We have created exceptional partnerships with our local mental health providers and have four designated Community Outreach officers. The expansion of the Crisis Intervention training will better serve our community by continuing to build on those relationships.”

“I would like to thank the Attorney General for choosing Cumberland County to host a pilot,” said Cumberland County Prosecutor Jennifer Webb-McRae. “I thank Chief Farabella for graciously accepting my call to participate. My office has supported CIT training for all of our departments, including Millville, for several years. Training more officers will increase our ability to address mental health appropriately and ultimately make our community safer.”

Over the past two years, the Attorney General’s Office has consulted closely with law enforcement leaders, community leaders, police unions, civil rights groups, and victims’ advocates to ensure that policing reforms are developed with meaningful buy-in from all relevant stakeholders. This deliberative process has helped the Attorney General’s Office develop progressive policies with broad support across law enforcement.

The initiatives announced today build on important policies and programs the Attorney General’s Office has implemented in recent years to bolster police-community trust: 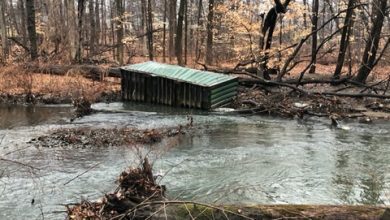 Abandoned dumpster to be removed from Whippany River