The Executive Order, which increases the state’s current goal of 7,500 MW, also directs the New Jersey Board of Public Utilities to study the feasibility of increasing the target further.

Accompanying the Executive Order, Governor Murphy also announced the release of the Green Jobs for a Sustainable Future report, created by the New Jersey Council on the Green Economy in partnership with the Governor’s Office of Climate Action and the Green Economy.

The report outlines recommendations and pathways for growing a demographically representative and inclusive green workforce as New Jersey pursues its clean energy future. Established during Governor Murphy’s first term, the Council is comprised of experts, advocates, and leaders from across industry and organized labor.

Governor Murphy directed the Council to prepare the report in order to promote diversity and opportunity in the green economy for environmental justice communities while making pathways to green jobs more accessible for workers, especially union members.

In addition to introducing the Council’s report, Governor Murphy also announced the release of an Offshore Wind jobs analysis and highlighted $10 million in new investments, which will guide and support the State as it prepares to execute a One Year Action Plan designed to generate good-paying jobs in the growing green economy.

These announcements, which were made during Climate Week at a U.S. Climate Alliance event alongside New York Governor Kathy Hochul, underscore Governor Murphy’s commitment to building an inclusive green workforce and achieving a 100-percent clean energy state economy by 2050.

“Extreme weather events and severe flooding across the country leave no room for doubt – the effects of climate change are becoming more impactful and more aggressive, and we must do the same,” Murphy said. “Our renewed and strengthened commitment to offshore wind development testifies to my Administration’s understanding that, regardless of our impressive successes to date, there is always more that we can do to make New Jersey more sustainable while further advancing the state’s economic vitality. Indeed, the groundbreaking report prepared under the aegis of the Council of the Green Economy proves, now more than ever, that environmental health and economic health are inextricably connected.”

“Let there be no doubt that New Jersey is a leader when it comes to moving towards a green economy. Today’s actions take us a few steps forward towards Governor Murphy’s goal of becoming a 100-percent green-energy state by 2050,” said First Lady Tammy Murphy, honorary chair of the Council on the Green Economy. “When that day comes, the Council on the Green Economy will have created an equitable workforce of well trained and skilled climate literate professionals who will continue the fight for generation to come against climate change.”

“New Jersey will depend on a highly trained workforce to ensure Governor Murphy’s energy goals are met as our state positions itself as a national model for renewable energy sectors,” said New Jersey Department of Labor and Workforce Development Commissioner Robert Asaro-Angelo, New Jersey Council on the Green Economy Co-Chair. “The increasing opportunities in the offshore wind and clean energy sectors afford workers of all incomes and backgrounds the prospect of developing specialized, in-demand skills and talents, leading to the clear pathway for advancement and financial success that comes with high-quality, family-sustaining green jobs.”

“Today’s exciting announcement by Governor Murphy demonstrates New Jersey’s commitment to offshore wind and workforce development for our green economy,” said NJBPU President Joseph L. Fiordaliso. “Offshore wind is a vital component of our clean energy mix as we strive to meet 100 percent clean energy by 2050. The Board has already approved three offshore wind projects in its first two solicitations, totaling more than 3,700 MW and is now preparing for its third solicitation of 1,200 MW in the first quarter of 2023. Creating a workforce to meet the needs of this burgeoning industry is critical to the success of creating a clean energy future and combatting climate change.”

“From the country’s first purpose-built offshore wind port to a nation-leading strategy for improving water infrastructure, New Jersey is demonstrating that strong environmental policy supports and promotes economic growth,” said Shawn M. LaTourette, the State’s Commissioner of Environmental Protection and Co-Chair of the Council on the Green Economy. “The Murphy Administration’s commitment to improving our environment as we promote growth is creating good-paying jobs, including through our pursuit of a just clean energy transition and clean water for all. The Council’s inaugural report charts a course for accelerating New Jersey’s green economic growth.” 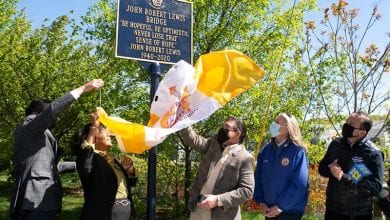