MORRIS COUNTY, NJ – The Morris County Board of County Commissioners approved agreements that will allow restoration and preservation work to begin on five historic properties just four weeks after the board approved the projects – and 25 others – to receive $2.65 million in grants from the county’s Preservation Trust Fund.

The grant agreements are a necessary first step toward preservation work actually commencing under the grants approved by the board on July 13.

The largest funding agreement of the five cleared Wednesday night involves a $172,600 grant for a gatehouse at the Loyola Retreat House in Morristown.

The grounds were once the estate of a wealthy entrepreneur, Robert D. Foote, whose Gilded Age mansion was built in 1906 and called the Spring Brook House before his death. The property was donated in 1927 to a religious order and has since been known as the Loyola Retreat House.

The unique gate house was constructed in 1855 and is a wood framed building that includes a dramatic concave and flared mansard roof. The current project involves restoration of the exterior, including masonry repair and repointing work at the foundation and repairs to the wood siding and trim. The project also includes replacement of windows and doors.

The other grant agreements approved this week include two projects that applied for county grants for the first time:

Grant agreements also were cleared Wednesday for The Growing Stage in Netcong, which is which is home to the Children’s Theater of New Jersey, and Acorn Hall in Morristown.

The Growing Stage was originally built in 1919 as the Palace Theatre, an early venue for screening motion pictures. The current  $8,000 grant will provide for completion of construction documents for structural upgrades to the stage, the replacement of the stage flooring and replacing exterior lighting.

The Acorn Hall, home to the Morris County Historical Society, was constructed as an Italianate residence in 1853 and expanded in 1860. The current $36,000 grant will assist with foundation stabilization including preparation of construction documents, installation of brick and repointing.

As of last month, Morris County has awarded 512 grants amounting to $45,945,925 to assist in the preservation, protection and restoration of 122 historic properties since 2003, when grants were first issued for protecting historic sites through Morris County’s Preservation Trust Fund. The sites are located in 34 towns around Morris County. 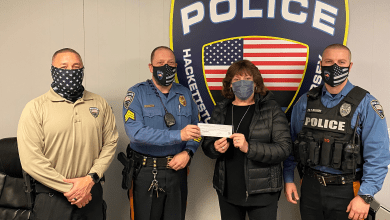