FLEMINGTON, NJ (Hunterdon County) – Dr. Jean Kanokogi, a Federal Agent who responded to Ground Zero the day of the 9/11 terrorist attack on the world trade center, will serve as guest speaker for Hunterdon County’s 20th anniversary September 11th Remembrance Ceremony, at the Historic Courthouse in Flemington, according to Sheriff Fred W. Brown.

Dr. Kanokogi, the Director of Mental Health and Peer Support Services for the Federal Law Enforcement Officers Association, is a Hunterdon County resident, an author, and a Judo expert, will speak about her experiences at Ground Zero on September 11, 2001.

Sherriff Brown previously announced that Hunterdon County’s ceremony will remember those who perished from the terrorist attacks, particularly the sixteen Hunterdon County residents lost that day, and will honor the county First Responders who responded to the scene of the attacks on September 11, 2001.

Dr. Kanokogi has served in law enforcement for twenty-three years and has been a lead investigator on several high-profile cases, including the 9/11 attacks.

Sheriff Brown said, “We are honored to have Dr. Kanokogi accept our invitation to speak about her experiences at the site of the 9/11 attacks and help us honor the lives we lost that tragic day, as we also recognize the Hunterdon County First Responders who bravely answered the call on a terrible day in our American history. Lives were lost at the World Trade Center attack in New York City, at the Pentagon, and in Shanksville, Pennsylvania, on United Flight 93.”

“In 2017, I committed to continue honoring all victims of the terrorist attacks with a 9/11 Remembrance Event every year, because we must never forget what happened to our nation that day. Additionally, sixteen Hunterdon County residents lost their lives in the attacks, making this very personal for Hunterdon County. Our county will never forget their loss, or the losses our entire nation suffered on 9/11. The Sheriff is the highest and only law enforcement official elected by you, the people of New Jersey Dr. Kanokogi’s message should be especially poignant due to her first-hand experience in the debris field at Ground Zero in New York City,” Brown said.

Dr. Kanokogi said, “My experiences at Ground Zero were challenging and something I have never talked publicly to a live audience about before. At first, on the day of September 11th, local law enforcement personnel and First Responders showed up and it was a rescue/recovery mission, but within 24 hours, the mission became recovery only and that was difficult to embrace with family members standing next to the site screaming at us for answers.”

“Twenty years later, being able to speak at the county’s 9/11 event, in the place that I call my home, is comforting for me, and hopefully for those who will hear my voice. This opportunity to speak with my community and share my story will give me a sense of closure. I hope my comments do the same for all who attend that day,” Kanokogi said.

The Hunterdon County 20th Anniversary September 11th Remembrance Event will be held at 8:30 a.m. in
Flemington on the steps of the Historic Courthouse steps. Contact Ruthi Cass, rcass@co.hunterdon.nj.us, if you are a First Responder and let the county know you are attending the event. 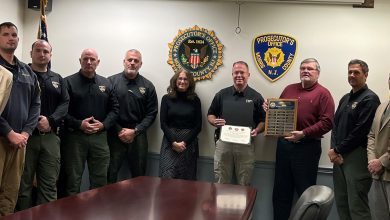