Lt. Hunter Broten is an instructor pilot with the “Wise Owls” of Training Squadron (VT) 31, based in Naval Air Station Corpus Christi, Texas. The squadron flies the T-44C Pegasus aircraft.

A Navy instructor pilot is responsible for providing advanced mulit-engine instruction to student military aviators so they may obtain the skills required to safely operate naval aircraft in the fleet.

“It’s exciting knowing that these young aviators are going to be the future of naval and Marine Corps aviation and being a part of that is pretty rewarding,” Broten said.

Broten credits success in the Navy to many of the lessons learned growing up in Whitehouse Station.

“Being a member of both my swim and soccer team in high school, taught me how to interact with a wide variety of people and strengthened my people skills,” Broten said. “Additionally, my parents raised me to have a hard work ethic and this has helped me become a more effective leader.”

After graduation, pilots continue their training to learn how to fly a specific aircraft, such as the Navy’s P-8 Poseidon maritime patrol aircraft or the Marine Corps’ MV-22 Osprey tilt-rotor aircraft. They are later assigned to a ship or land-based squadron.

“Our priorities center on people, capabilities and processes, and will be achieved by our focus on speed, value, results and partnerships,” said Secretary of the Navy Richard V. Spencer. “Readiness, lethality and modernization are the requirements driving these priorities.”

Though there are many ways for sailors to earn distinction in their command, community and career, Broten is most proud of begin assigned to his previous squadron that was awarded the Navy Battle ‘E’ Award for 2018.

“It was a representation of my squadron being the best at anti-submarine warfare and naval operations,” Broten said. “Knowing that I was a part of that is a rewarding and humbling experience.”

Serving in the Navy is a continuing tradition of military service for Broten, who has military ties with family members who have previously served. Broten is honored to carry on the family tradition.

“My grandfather served in the Army Reserves as a mechanic during WWII,” Broten said. “I’m the first of my immediate family to serve both active duty and overseas and it’s exciting to start that legacy.”

As a member of one of the U.S. Navy’s most relied-upon assets, Broten and other sailors know they are part of a legacy that will last beyond their lifetimes providing the Navy the nation needs.

“The ability to serve and provide in defense of our nation is very important to me and epitomizes the notion of giving back to society,” Broten said. 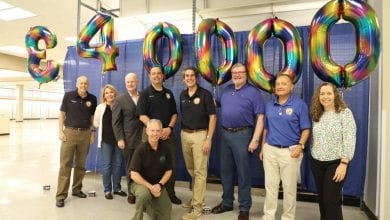