“Not only is ExxonMobil a major employer in the county, but it is fascinating to learn that the nearly 1,000 scientists, engineers and technicians on the Annandale campus are working to develop the next generation of energy solutions. We had the opportunity to see firsthand some of the breakthrough innovations underway,” Soloway said.

“The company is not just preparing for a future with alternative energy resources, it is leading the way in the industry through its scientific research taking place right here in Hunterdon County. We are proud the company chooses Hunterdon County for this far reaching and important work,” Rich said.

ExxonMobil’s Annandale campus has been the company’s center of fundamental research and science innovation for the past thirty-eight years.

The Hunterdon County officials learned that ExxonMobil scientists, engineers and technicians at the site are working to develop the next generation of energy solutions to address hard to decarbonize sectors such as commercial transportation, power generation and manufacturing.

ExxonMobil’s deep connection to Hunterdon County traces back decades. Standard Oil of New Jersey, which became Exxon, had its statutory headquarters in Hunterdon County for many years, and the company annually held its shareholder meetings at the Palace Theater for 15 years in the early part of the last century.

The Director’s community tour, which is highlighting commerce, agriculture, and community achievements around Hunterdon County, has included stops in Raritan, Clinton, and Readington Townships, recognizing all three communities designated as the safest towns in which to live in New Jersey. 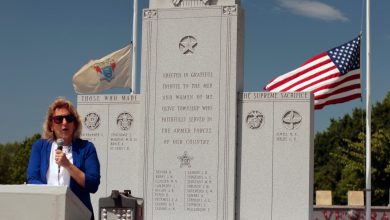