The independent audit of county finances for 2015, 2016, 2017, 2018, and 2019 have regularly found no material findings and no issues of non-compliance, and that county financial records have been maintained in accordance with accounting principles, according to the audit document.

“Tracking spending, ensuring that it is only for necessary costs and it stays within the budget, are the key components contributing to the Freeholders’ ability to freeze the tax rate and reduce the budget below the spending level of a decade ago,” Holt said.

Freeholder Board Director Shaun C. Van Doren said, “Once again it is the factual report card, in the form of the annual independent audit, more than our words, that establishes the county’s sound fiscal condition. The control of spending and taxes in Hunterdon County over the past several years is no accident, it occurs because of efficiency, effectiveness and tight fiscal controls, and this audit once again drives home that point.”

Van Doren said, “The County anticipates 2021 may be a difficult budget year due to the economic setbacks caused by the pandemic shutdown. It is, therefore, comforting to know that the county’s system for tracking and controlling spending is healthy and operating effectively. That system will be vital to the taxpayers, as we move forward.”

All Hunterdon County audits are available on the county’s website. 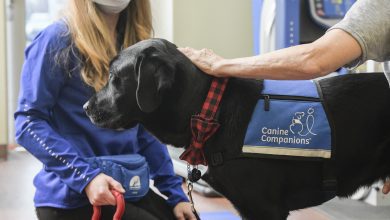 St. Luke’s lets the dog in: The first facility dog is ready to comfort, motivate patients