“I can report tonight that not only has program to house County inmates at Warren County’s Correctional Center in Belvidere that began in February been effective, efficient, and successfully implemented, but also that the anticipated savings for the year is expected to exceed $600,000, compared to what was expended in 2019,” Brown said.

Brown had projected a savings of approximately $250,000 when the decision was made to switch to Warren County.

Freeholder Board Director Shaun C. Van Doren said, “The Board was advised at the beginning of the year that there could be a cost savings by moving the program to Warren County. The fact that the consolidation is paying even more dividends than anticipated is welcome news for taxpayers.”

The Sheriff explained a key savings has come from a reduction in inmate medical costs and medical security costs, due to the fact that physician led medical and psychiatry services are available on site at the Warren facility.

Freeholder John E. Lanza, who supported the initial jail consolidation plan in 2016, said, “Today, the decision by the Freeholder Board and the Sheriff to consolidate the county prison with Somerset County back in 2016, to seek taxpayer savings through a shared service, seems like a no brainer. But as one of only two Freeholders who was serving at that time, I can attest it was not an easy decision.”

“Only through careful and thorough analysis and understanding the benefits, not the least of which was avoiding $5 million in capital costs needed to update the county jail, was that decision made in 2016. It was the correct move for the county then, saving millions in tax dollars over the years,” Lanza said.

“Now, the decision at the beginning of this year to establish a similar shared service with Warren County has again proven to be a real value to taxpayers,” Lanza said.

Van Doren said, “This kind of exceptional work done by the County’s Constitutional Officers and Department Directors, to consistently seek out and implement operations that are effective and efficient, is the reason the county has kept its fiscal house in order.” 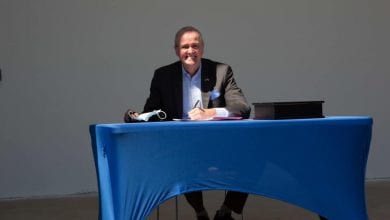