FLEMINGTON, NJ (Hunterdon County) – A Ground Zero responder from September 11, 2001, serving as Guest Speaker at Hunterdon County’s 20th Anniversary 9-11 Remembrance Ceremony, told those in attendance “The attacks of September 11th were intended to break our spirit. Instead, we emerged stronger and more unified.”

Sheriff Brown, the sponsor of the annual ceremony noted that sixteen Hunterdon County residents perished at the World Trade Center site on 9-11, along with nearly 400 First Responders and thousands of others, said, “I believe we have an obligation to honor the memory of their lives each and every year.”

The columns of the Historic Courthouse were adorned with banners bearing the names of each the Hunterdon County residents killed in the attacks.

“We also must remember that on September 11, 2001, this nation was attacked, the most heinous assault on our soil since Pearl Harbor. It was a terrorist attack that murdered thousands, by enemies of our nation, of our values, our freedoms, and our way of life. That is something that also needs to be burned into our memory,” Brown said.

“Despite the tragedy of that day, there were also heroes – those who ran towards danger, saved lives, and gave their lives to save others. And our first responders here in Hunterdon County who answered the call on 9-11 are an esteemed part of that group. They are special, selfless people and most deserving of our thanks and recognition,” Brown said.

Sheriff Brown and Prosecutor Robeson presented each of the 9-11 First Responders with a commemorative 20th Anniversary pin, in recognition of their service.

“Let us never forget that we were attacked. We must remain vigilant yet heal. With open hearts and an open mind, everyone from every walk of life can and should enjoy the freedoms in our melting pot of a nation,” Kanokogi said.

Sheriff Brown, at the beginning of the ceremony asked those assembled for a moment of silence in memory of the thirteen U.S. Service members killed at Kabul Airport on August 26th and the six individuals who were lost in Hunterdon County during the recent Hurricane Ida storm.

Many County Veterans were in attendance and Dan Torrone served as Master of Ceremonies.

During the proceedings the Hunterdon Harmonizers performed the National Anthem and the Clinton Church of the Nazarene Worship Band performed Amazing Grace.

Revered Dave Errickson of the Old Rocks Church in Lambertville and Chaplain Larry Coyne, the Chaplain for the Clinton Fire Department and County Fire Chiefs Association, offered the invocation and benediction, respectively.

The New Jersey State Police Honor Guard performed the Presentation of the Colors and a State Police Aviation Bureau Helicopter performed a flyover for the ceremony, where the State Police Mounted Patrol was also represented. 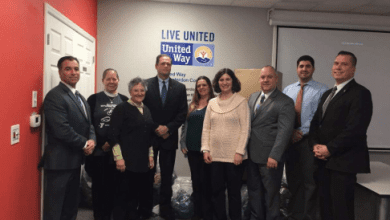