On Feb 24 at 12:13 a.m., a township officer was on routine patrol when the officer observed a 2011 Volkswagen exit the Shell Gas station in Mount Olive Township and proceed onto Route 46 west, driving in an erratic manor, police said.

A check of the vehicle’s registration revealed that the vehicle was stolen. The officer attempted to stop the vehicle but the driver failed to stop, increasing speed and continued on Route 46 west, police said.

The officer continued to pursue the vehicle along Route 46 west through Hackettstown, Warren County and onto Route 517. The vehicle then proceeded onto Mountainview Drive in Green Township, Sussex County where the vehicle stopped in the driveway of a residence, police said.

The driver, who was later identified as Austin J. Pember, 19, of Bayonne was taken from the vehicle at gunpoint, and arrested without incident, police said.

Pember was lodged in the Morris County Correctional Facility pending a court appearance. 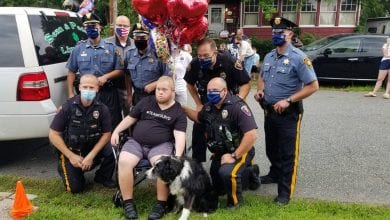