MOUNT OLIVE TOWNSHIP, NJ (Morris County) – A New York man is facing charges including driving while intoxicated after police say they found him inside his car, which was stopped in the right lane of travel on International Drive South and had multiple open wine bottles in the vehicle.

Derrick R. Adkins, 49, of Hempstead was charged with DWI, reckless driving, refusal to submit to chemical breath testing, and open container of alcohol in a motor vehicle.

On Feb. 1, at 4:53 a.m., a township officer observed a 2015 Hyundai stopped in the right lane of travel on International Drive South. The officer pulled behind the vehicle, and initiated a motor vehicle stop, police said.

The officer made contact with the driver, who was identified as Adkins, and as the officer spoke with him, the officer detected the odor of an alcoholic beverage, and noted that Adkins appeared to be impaired, police said.

The officer observed multiple open wine bottles on the passenger side floor. Adkins was asked to exit his vehicle for field sobriety testing, and was subsequently arrested, police said.

Adkins was transported to police headquarters where he refused to submit to chemical breath testing. He was charged and then released to a sober driver pending a court hearing, police said. 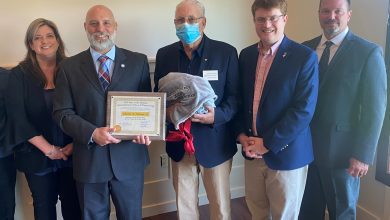