On Sept. 27 at around 5:15 p.m., officers responded to Lambert Drive for a report of a motor vehicle accident. Once on scene, it was determined that the accident had occurred due to road rage, police said.

The driver, a 17-year-old boy from Sparta, who stayed on scene told police that a tan Jeep attempted to pass him over the double yellow lines on Sussex Mills Road, almost hitting his vehicle, police said.

The teen further stated that he gestured to the other driver, who was later identified as Phil Spagnola of Augusta, using his middle finger. This gesture apparently enraged Spagnola, police said.

A witness reported seeing Spagnola’s vehicle enter Lambert Drive on the wrong side of the road, and cut in front of the juvenile’s vehicle causing it to strike the rear of Spagnola’s Jeep, police said.

The witness saw Spagnola exit his jeep and approach the juvenile’s vehicle. He then allegedly punched the juvenile several times through the open driver’s side window. He then returned to his Jeep and left the scene, police said.

On Oct. 8, Spagnola signed complaints against the juvenile for reckless driving, tailgating and assault by auto, police said. 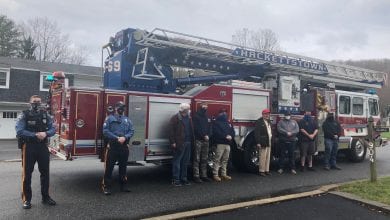 Man airlifted to hospital after falling from tree in Hunterdon County