READINGTON TOWNSHIP, NJ (Hunterdon County) – A Middlesex County man was charged with driving while intoxicated after he crashed into a tree in Readington Township, police said.

Upon arrival, officers observed a black Nissan into a tree with the vehicle heavily damaged and all airbags deployed, police said.

An officer spoke with the driver, who was identified as Brad Fisher, 44, of North Brunswick, and provided medical aid until Whitehouse Rescue Squad arrived on scene, police said.

While speaking with Fisher, the officer allegedly observed signs of impairment. Fisher was transported to Robert Wood Johnson New Brunswick where he was treated for his injuries, police said.

Fisher was charged with driving while intoxicated, reckless driving, and failure to maintain lane. 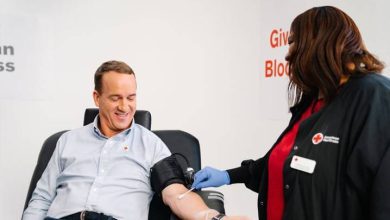 American Red Cross, Peyton Manning huddle up for a lifesaving play this January