BYRAM TOWNSHIP, NJ (Sussex County) – A 27-year-old Byram Township man is facing several charges after he allegedly called in a fake armed robbery and had plans to attack the arriving officer with a knife to force the officers to shoot him in self-defense, police said.

On June 20 at 11:47 p.m., officers responded to a reported armed robbery in progress involving a firearm on Lackawanna Drive, police said.

Upon arrival in the area, officers observed the man walking out of the woods onto Lackawanna Drive, police said.

The man was initially uncooperative and ignored several commands to remove his hands from the pockets of a hooded sweatshirt he was wearing. He eventually complied and was taken into custody without incident, police said.

A knife was located in the pocket of his sweatshirt, police said.

Upon questioning the man, he allegedly admitted making the 911 call reporting the fictitious robbery knowing that officers would respond to the area. He then stated that he had planned to attack a police officer with the knife in order to force the police to shoot him in self-defense, police said.

He was then transported to the hospital for an evaluation.

He was charged with second-degree false public alarm, fourth-degree unlawful possession of a weapon, and fourth-degree misuse of 911 emergency line. Police didn’t release the man’s name. 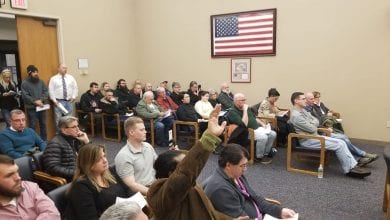