MANSFIELD TOWNSHIP, NJ (Warren County) – Mansfield Township Police Officer David Hanf has received a Life Saving Award after he and others successfully performed CPR on a woman at the Prudential Center in Newark earlier this month.

Officer Hanf was attending a concert on Saturday Oct. 6 at the Prudential Center when he heard someone calling for help from the women’s restroom, police said.

Officer Hanf responded immediately and found family members tending to Jean Jadro , 73, who was seated in a chair, police said.

Officer Hanf, Nurse Stacy Rivera and the victim’s son lowered her to the floor, checked her vitals and initiated CPR, police said.

Jadro was transported to the hospital and has since fully recovered, police said.

“We were honored to have the victim, Jean Jadro, and her family at the meeting and are all so thankful for Officer Hanf’s actions,” Mansfield Township Police Chief Michael Reilly said 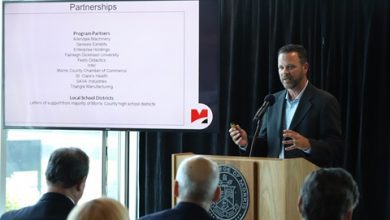