MORRIS COUNTY, NJ – Morris County is moving ahead on a series of bridge infrastructure projects this summer, taking advantage of lighter-than-usual traffic during the COVID-19 crisis to get work done with less impact to the motoring public.

The Russia Road bridge replacement project in Jefferson Township started this week, while work continues on the new East Blackwell Street bridge in Dover and the new Waterloo Road bridge in Mount Olive and Netcong.

Three county bridge projects already have been completed this year, with each of the spans having reopened: Schooley’s Mountain Road bridge in Washington Township, Chestnut Terrace Bridge in Rockaway Township, and the Mill Road bridge in Morris Township.

In addition, three other bridge project contracts have been awarded, with work potentially slated to start later this year: Valley Road bridge in Rockaway, West Central Avenue bridge in Wharton, and Intervale Road bridge over Troy Brook in Parsippany.

“The Board of Freeholders has made the maintenance of our transportation infrastructure a priority, working to provide a first-class county road and bridge network for our residents and businesses,” Morris County Freeholder Stephen Shaw said. “Even during the COVID-19 pandemic, we have moved ahead aggressively to ensure that we maintain our status as The Infrastructure County in New Jersey.

Work began in January to replace the deck on the East Blackwell Street bridge over the Rockaway River in Dover. East Blackewll Street is closed to traffic at the project site, with a 2.8-mile detour in place until expected completion later this year.

The $1.85 million project includes replacement of the existing 37-year-old bridge deck and both approaches to the heavily traveled span. A temporary pedestrian bridge was installed to maintain walking accessibility to the area throughout the project.

The bridge now being replaced was installed in 1982 and carried more than 18,000 vehicles daily. It was 110-foot long and 58-foot wide with dual two-way traffic lanes and a center turning lane leading traffic towards South Salem Street.

Work began in late February on replacement of bi-county Waterloo Road bridge, which spans Netcong and Mount Olive in Morris County and connects with Stanhope in Sussex County.

The $2.3 million replacement project is required because the bridge is structurally deficient and functionally obsolete. The project has required closure of Waterloo Road, with a 2.5-mile detour installed for the estimated nine-month project.

The bridge being replaced was a single span steel truss originally built in 1894, which carried about 1,100 vehicles per day. The 18-feet wide and 43-feet long bridge carried two lanes of traffic –one in each direction.

To maintain some of the historic character of the original bridge, the original trusses will be restored and re-installed.

Work began this week to replace the Russia Road bridge over Russia Brook in Jefferson Township. The county-owned span will be closed to motor vehicle traffic, with a 5-mile detour in place for up to nine months.

The $1.2 million project will replace the existing 41-year-old bridge and both approaches. The bridge being replaced, which carries roughly 275 vehicles daily, was installed in 1979 and has had no major repairs done to it since that time.

Here is the full list of the county’s ongoing, completed, and proposed 2020 bridge projects: 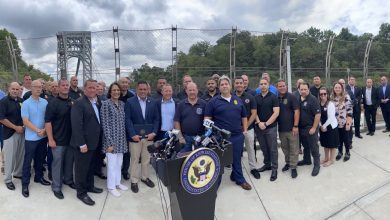