MORRIS COUNTY, NJ – The Morris County Chamber of Commerce, celebrating its 100th Annual Meeting Thursday, was presented with a special resolution from the Morris County Board of County Commissioners by Commissioner Director Stephen Shaw, who expressed thanks to the Chamber for its work as he reflected on the last 100 years in Morris County with members and guests who gathered at the virtual event.

“We, the Morris County Board of County Commissioners, will continue to partner with the Chamber moving forward as we work to further boost our economy. We are committed to keeping this the best place to live and do business anywhere,” Shaw said.

The Chamber was known by different names after emerging in 1921 from an organization known as the “Morristown Business Men’s Association,” which for many years before and after the turn of the 20th Century had exercised “a general supervision over affairs affecting the community interests,” according to the 1918 Industrial Directory of New Jersey.

Commissioner Shaw said the Chamber history, and that the directory showed the Chamber faced the same issues then as it does today, specifically “in the matter of extending inducements to attract industries” to “one of the most desirable and highly favored parts of the state.” He also noted some factual points about the era in which the Chamber was born.

“One hundred years ago, life expectancy was about 53 years, so if this event was taking place 100 years ago, many of us wouldn’t be here. Including me,” Shaw joked.

“The world was recovering from a pandemic known then as the Spanish Flu. History does have a habit of repeating itself. The automobile industry was born, leading to prosperity due to manufacturing jobs in the industry, steel production and highway building. Prohibition was the law of the land, imagine that if you can. Radios were the main source of entertainment; no TV and better yet no social media,” Shaw said.

But as the name changed, the mission remained the same, according to the Board of Commissioner’s “Resolution Honoring the Morris County Chamber of Commerce,” which reads in part: 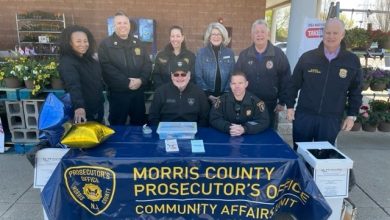