HANOVER TOWNSHIP, NJ (Morris County) – A Morris County man has been jailed after he allegedly planted drugs and a loaded handgun in a victim’s vehicle.

On Oct. 4, Hanover police received an anonymous phone call advising that a man was observed in the parking lot of the Shop Rite on East Hanover Avenue with a handgun. This man was allegedly observed placing the handgun under the front seat of his vehicle, police said.

The caller also reported that he observed illegal narcotics around this man’s vehicle, Officers responded to the location and found the suspect’s vehicle and a quantity of suspected cocaine near the vehicle, police said.

The driver was then arrested and taken to the police station. The suspect was insistent that the drugs and gun were not his and someone else must be responsible. The arresting officers contacted the Hanover Township Detective Bureau who came in to interview the suspect. He was then lodged in the Morris County Jail on charges relating to the possession of the handgun and dangerous drugs, police said.

The Morris County Prosecutor’s Office, conducted an investigation and followed up by interviewing associated individuals and reviewing video from both Shop Rite and Chase Bank. The video showed that someone else did, in fact, plant the handgun and dangerous drugs in the individual’s vehicle, police said.

A further police investigation revealed that the suspect was operating a rental vehicle and a review of the rental records led to the arrest of Henry Patterson, 47, of Wharton, police said.

The individual who was originally arrested and charged was released. 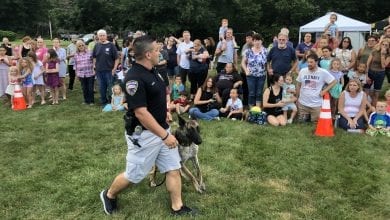 Crowd turns out for National Night Out in Hackettstown (VIDEO & PHOTOS)