During sentencing on February 26, 2020, Hudy Muldrow of Newark, NJ admitted that on the morning of May 17, 2018, while acting as a school bus driver for the Paramus School District, he recklessly operated a school bus on Interstate 80 in Mount Olive Township, causing the deaths of two of his passengers,Miranda Faith Vargas, a 5th grade student at East Brook Middle School and Jennifer Williamson, a teacher at East Brook Middle School. Muldrow also admitted that he caused injuries to five adult passengers and the driver of a dump truck. He further acknowledged that his conduct created a risk of harm to all 38 children who were passengers on his bus.

Muldrow had plead guilty to two counts of second-degree reckless vehicular homicide, one count of third-degree endangering the welfare of children, five counts of fourth-degree assault by auto, and one count of disorderly persons assault by auto, and was subsequently sentenced to an aggregate term of 10 years in New Jersey State Prison, with the first five years of this sentence subject to the parole ineligibility provisions of the No Early Release Act.

Advocates Pasquariello and Holloway coordinated communications about the case with 45 separate victims and their families during the investigation and subsequent prosecution. The Advocates tailored their outreach strategies to communicate information about the case to meet each family’s diverse needs.

Supervising Assistant Prosecutor Christopher Schellhorn noted the number of separate victims and their families is unprecedented for a single case before the Morris County Prosecutor’s Office.

“Both Donna and Amanda have done outstanding work for crime victims for many years. This case presented an incredible challenge due to the huge number of victims who were predominantly children. For many months, they worked tirelessly to keep the victims and their families informed of all court proceedings and provided information for any services they might need. For all this work, I am extremely proud to sign their commendations,” Knapp said.

ShopRite donates more than $1.5M for local charites at the 2021 ShopRite LPGA Classic presented by Acer 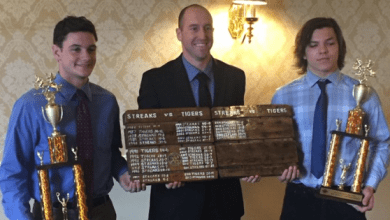