Surrogate Darling gave special thanks to the teams that brought the project to fruition, specifically Buildings & Grounds, Information Technology, the designer, and her Chief of Staff, Christina Ramirez. Reverend Herman Scott opened the ceremony with a blessing for the new office.

The Surrogate’s office was temporarily relocated to a small space for several months while the office suite was taken down to the outer walls and concrete floors. It had been over 30 years since the suite was renovated and the work was mandated by the county with the caveat that Surrogate Darling be given time in the office before renovations in order to choose the most practical layout for the office now and into the foreseeable future.

“It was time to redesign and rework the office to create an efficient workflow with easy, welcoming access for the public to our office,” Darling said. “We added a layer of safety and security for both the public and our staff based on the U.S. Marshall’s assessment for courthouse security.”

The renovation, part of the County’s overall infrastructure maintenance, also coincides with the overall modernization efforts Surrogate Darling has brought to the Surrogate’s Office since 2020 when she became Surrogate. The Surrogate and her team’s overall goal is to offer the highest level of customer service and respond to the needs of the community by offering easy access and convenience. 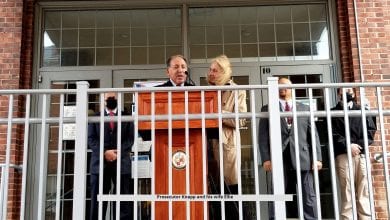