NEW JERSEY – Leveraging proceeds from New Jersey’s participation in the Regional Greenhouse Gas Initiative (RGGI), Governor Murphy has announced an additional $10.8 million investment to further protect residents, the environment and the economy from the worsening impacts of climate change.

The latest round of proceeds will be used to increase the number of electric trucks and buses that traverse communities overburdened by air pollution and expand the number of community fast-charging locations, Commissioner of Environmental Protection Shawn M. LaTourette said.

To date, New Jersey has invested more than $100 million — $57 million in RGGI proceeds and $60 million in Volkswagen Settlement funds – for 370 electric vehicles operating in overburdened communities.

“While medium- and heavy-duty vehicles are fewer in number than passenger cars, they contribute a much larger share of emissions per vehicle, so there is a major benefit to the environment when we electrify them,” Commissioner LaTourette said. “In addition, RGGI proceeds have also funded four electric ride-sharing projects which increased clean mobility options for our urban residents. We will continue to look for opportunities to develop and fund those types of projects to ensure that all residents benefit from electrification investments.”

In late July, New Jersey joined 16 states, Washington, D.C. and the Canadian province of Quebec to chart a bold path forward for electrifying medium- and heavy-duty vehicles through the release of a multi-state action plan. Developed through extensive collaboration and engagement with stakeholders, the action plan bolsters the DEP’s existing policies, regulations, outreach and education to achieve a future with zero carbon emissions.

New Jersey’s Electric Vehicle Law , signed in 2020, establishes a goal of having at least 1,000 community charging locations in a town center, commercial area, retail center or near concentrations of multi-unit dwellings by 2025. The latest competitive solicitation issued by the DEP this spring yielded an unprecedented 214 applications for fast-charging stations throughout the state.

The 62 dual port fast-chargers will be installed at 31 locations – two per site — including town centers and commercial areas. Of the 31 locations chosen for the fast-chargers, 16 applicants were government entities and 15 were private entities. Locations that were not selected for this round of funding will be considered as part of the State’s National Electric Vehicle Infrastructure Deployment Plan . To date, the DEP has awarded just over $6 million for 1,126 chargers that have 1,938 plugs at 212 locations statewide. 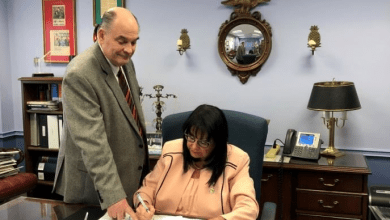