The New Jersey Department of Environmental Protection is reminding the public of important safety tips to follow as black bears begin emerging from winter dens and searching for food.

“It is especially important for residents who live in bear country to be aware of the common-sense steps they can take to reduce the chances of a bear coming onto their properties,” Commissioner Catherine R. McCabe said. “These reminders also are important for those who spend time outdoors or have a chance encounter with a bear.”

Black bears have been sighted in all of New Jersey’s 21 counties, but the population is densest in the northwestern counties of Sussex, Warren, Passaic and Morris.

Black bears are not true hibernators. They are emerging from their dens after a period of winter dormancy known as torpor, during which they may lose up to 20 percent of their body weight. They need to restore this weight for the mating season, which begins in late May and continues well into summer.

One of their primary natural food sources in spring is skunk cabbage, a leafy plant that grows along edges of rivers and streams and other wetlands. Grasses, forbs, tubers, bulbs and insects are other natural food sources. Bears may also feed on carrion.

Bears have an acute sense of smell and can detect scents across great distances, making it critical to prevent bears from being attracted to other food sources around properties, such as trash, food residue on grills, bird seed and pet food.

“Bears are by nature wary of people, however, animals attracted to neighborhoods may learn to associate people with food,” said Division of Fish and Wildlife Acting Director Dave Golden. “When bears make that connection they may become aggressive, cause property damage or seek handouts from people.”

Intentional feeding of a bear is dangerous, illegal and carries a fine of up to $1,000.

The Division of Fish and Wildlife offers these tips to minimize encounters with bears:

If you encounter a black bear in your neighborhood or outdoors while hiking, fishing or camping, follow these tips:

DEP wildlife experts emphasize that a black bear passing through an area and not causing a specific problem, such as breaking into trash or otherwise trying to access food sources on people’s properties or posing a safety threat, should be left alone.

People should leave the area and allow the bear to continue on its way. When frightened, bears may seek refuge by climbing trees. If the bear does go up a tree, clear the area and give the bear time to climb down and escape.

Report bear damage, nuisance behavior or aggressive bears to the Wildlife Control Unit of the DEP’s Division of Fish and Wildlife at 908-735-8793. During evenings and weekends, residents should call their local police department or the DEP Hotline at 1-877-927-6337. 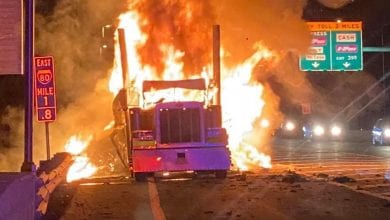 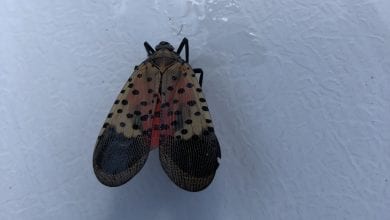