Jeffrey A. Mulcahy, 58, of Wayne pleaded guilty by videoconference before U.S. District Judge Michael A. Shipp to an information charging him with one count of assault with a dangerous weapon with intent to do bodily harm.

According to documents filed in this case and statements made in court, On Sept. 2, 2019, two individuals (Victim 1 and Victim 2) were swimming in the Delaware River in the Kittatinny Point area of the Delaware Water Gap in Warren County, New Jersey. Mulcahy approached them and began speaking to them about fishing. After a few minutes, Mulcahy departed the area, returning approximately 15 minutes later, holding a can of beer.

Mulcahy continued to talk to the victims about fishing, however, Mulcahy appeared agitated. The victims had gotten out of the river and were standing near the riverbed. Mulcahy removed what appeared to be a handgun from his waistband and pointed it at Victim 2’s head. While pointing the gun at Victim 2, Mulcahy ordered the vicitms to the ground. Mulcahy then pointed the gun at Victim 1 and stated that he was going to kill Victim 1 if Victim 1 did not listen to him. Mulcahy struck Victim 1 in the head and neck area with the handgun.

Mulcahy then began pulling rope out of his pocket and attempted to get Victim 1’s hands behind Victim 1’s back. Victim 1 resisted and was able to take Mulcahy to the ground, where the two began a physical struggle. Mulcahy’s handgun fell to the ground and Victim 2 recovered it and left to contact law enforcement. After the brief physical altercation, Victim 1 ran off to a nearby picnic area to locate Victim 2.

The officer received information from the Warren County Dispatch Center that an off-duty fireman was traveling behind the Mulcahy’s vehicle on Route 46 eastbound in Independence Township and heading towards Hackettstown, police said.

The officer observed the vehicle traveling east on Route 46 and then activated the police vehicle’s overhead lights and sirens in an attempt to initiate a traffic stop. Mulcahy allegedly failed to yield to this officer’s lights and sirens. He then continued to elude the officer and also threw a t-shirt out the window, police said.

Mulcahy then stopped in the area of 70 Route 46 and he did not immediately comply with the officer’s instructions but was then finally arrested, police said.

Subsequent investigation of the handgun that Victim 2 recovered from Mulcahy revealed that it was a pellet gun.

The charge of assault with a dangerous weapon with intent to do bodily harm carries a maximum punishment of 10 years in prison and a fine of up to $250,000. Sentencing is scheduled for March 4, 2021. 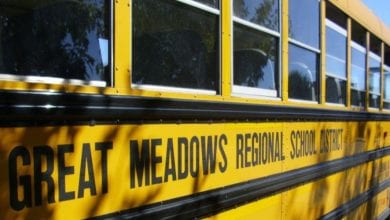