LOPATCONG TOWNSHIP, NJ (Warren County) – A Pennsylvania man was arrested Wednesday after police said he a loaded gun in his car.

An officer conducted a motor vehicle stop at around 1:22 a.m. on Route 22 east near the Phillipsburg Mall after the officer observed the vehicle allegedly traveling at an extremely low rate of speed and swerving in and out of its lane of travel, police said.

Upon stopping the vehicle, the driver, who was identified as Rafed M. Aljoboury, of Trucksville, PA., stated to the officer that he had a handgun in the vehicle, to which the officer observed in plain view near him, police said.

The handgun was loaded with a full magazine of 9 mm hollow point bullets. Aljoboury allegedly stated that he had a permit in Pennsylvania; however he was not permitted to carry a weapon in the State of New Jersey under that permit, police said.

Police: Intoxicated man found asleep behind the wheel on Route 22 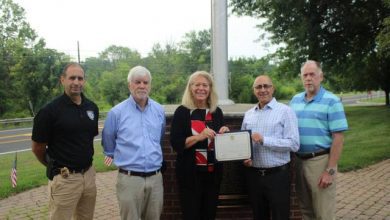