WASHINGTON BOROUGH, NJ (Warren County) – A Warren County Grand Jury on Wednesday indicted Kyle Kaspereen, 24, of Easton in the murder of an 84-year-old woman and attempted murder of her son, according to the Warren County Prosecutor’s Office.

On November 30, Washington Township police responded to 122 Wayne Street in Washington Borough for report of a vicious assault.

Upon officers arrival, Elaine Trachin, 84, was found unconscious, and William “Bart” Trachin, 53, was found taped to his wheelchair, with a garbage bag over his head, and critically injured. The cause of the injuries to both appeared to be blunt force trauma, authorities said.

Elaine Trachin was ultimately pronounced dead at the scene, while William Trachin was flown to a local trauma center where he remains in critical condition, authorities said.

Then on December 1, a review of William’s phone records revealed numerous contacts with Kyle Kaspereen, 24, of Easton but who had previously resided in Washington regarding the purported sale of a motorcycle owned by Mr. Trachin, prosecutor’s office said.

While Kaspereen was being interviewed, he was discovered to be deleting text messages and calls from his cellular phone. When confronted, he acknowledged the deletions and explained that what was on his phone contradicted his statement to law enforcement. At that time, Kaspereen was charged with the destruction of that evidence and lodged in the Warren County Jail, prosecutor’s office said.

Additional investigation recovered the deleted content from Kaspereen’s phone, which did in fact contradict his statement to law enforcement regarding his whereabouts, who he had contacted, and the timing of both. His cell phone was also found to be pinging from at or near the scene of the attack at the suspected time of the attack, authorities said.

A further research discovered that Mr. Trachin’s phone and Ms. Trachin’s wallet were both missing from the scene, authorities said.

An analysis of Kaspereen’s phone revealed numerous internet searches that included information on police investigation tactics – specifically with respect to murder -whether there had been any murders in Washington, N.J., and how to use a credit or debit card absent the pin number. These searches were performed after the discovery of Mr. and Ms. Trachin, but before any public announcement about those findings had been released, authorities said.

Video surveillance from hours after the attack appears to show Kaspereen dropping a cellphone into the Delaware River while walking across the Free Bridge from Phillipsburg into Easton where he resides. A search of the Delaware River by the New Jersey State Police discovered Mr. Trachin’s phone in the river near where that surveillance identified Kaspereen dropping it from the bridge, prosecutor’s office said.

A search of Kaspereen’s apartment revealed a trash bag consistent with that found over Mr. Trachin’s head that was unused and discarded. The search also discovered an empty box from a BB pistol that Kaspereen was found to have purchased in the last two weeks, prosecutor’s office said.

Kaspereen was charged on December 9 with the murder of Elaine Trachin and the attempted murder of her son, William “Bart” Trachin also first-degree kidnapping, first-degree robbery, second-degree burglary, and fourth-degree tampering with evidence. 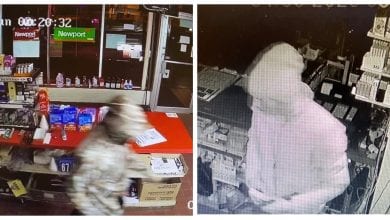 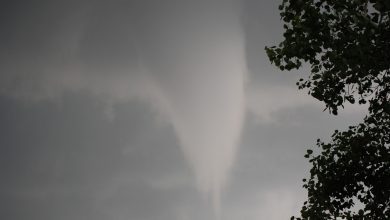