NEW JERSEY – The Republican members of the Senate Budget & Appropriations Committee called on Governor Phil Murphy and legislative leaders to commit to expanding tax relief in light of the Administration admitting to a total of more than $9 billion of tax overcollections in the current year and almost $7.8 billion more in revenue available for the upcoming budget year than projected just two months ago.

“The Murphy Administration finally admitted the obvious – that they are collecting $9 billion more out of the pockets of taxpayers than budgeted for the current year,” said Senate Republican Leader Steven Oroho (R-24). “New Jersey families are struggling with soaring prices and inflation, and Republicans have proposed $1,500 rebates to be returned to more than 4 million families this Spring. The Murphy Administration must commit to giving back at least this $1,500 to 4 million families this Spring.”

Senate Republicans have proposed a pair of “Give It Back” tax rebates that would return $1,500 of overcollections to New Jersey families as an added income tax refund returnable this Spring.  The rebate would be automatically sent out to every income tax filer without the need for applications, bureaucracy, or delays.

“My Republican colleagues and I can’t support a budget unless 4 million families receive $1,500 of direct relief this spring to help combat the pain caused by over taxation, soaring gas prices, and inflation,” said Senator Declan O’Scanlon (R-13), the Republican Budget Officer. “Since announcing yesterday that there was more than $9 billion of tax overcollections in the current year, all we have heard from the Administration and Democrat leaders is that maybe – if people are good boys and girls – they might return a little more through the Governor’s newly renamed, and woefully inadequate Anchor Rebate Program.”

The main “Give It Back” tax rebate proposed by Senate Republicans would return $1,000 back to New Jersey families as soon as it is enacted.

A second bill, the “Gas Price and Inflation Tax Credit Act,” would provide another $500 tax rebate when this spring to provide families with additional relief to counter record-high gas prices and the highest inflation in four decades.

In contrast to the Republican tax rebates that would provide relief immediately, the underwhelming Anchor program proposed by Governor Murphy would not deliver any relief until May of next year, and to less than half the families provided relief under the “Give it Back proposal.”

Further, the governor’s Anchor proposal would actually reduce rebates for hundreds of thousands of renters and homeowners already receiving rebates from existing programs the Governor has proposed to eliminate.

“It’s staggering that Governor Murphy finally admitted yesterday to taking $9 billion more from taxpayers than budgeted,” said Senator Michael Testa (R-1). “And yet he still has refused to give any of it back – even as his Deputy Treasurer admitted yesterday that the proposed consolidation of existing rebate programs into a newly named Anchor Rebate will actually cut rebates for hundreds of thousands of renters and homeowners.”

In addition to not returning tax overpayments, the Governor’s Administration admitted in budget hearings that they will increase the following taxes this year: income taxes for this calendar year due to unchecked bracket creep; employer payroll taxes beginning July 1; a regressive employee payroll tax increase beginning Jan. 1, toll increases beginning Jan. 1, and a $600 million health insurance tax, with a date to be determined.  Republicans have also called for these other unnecessary tax increases to be halted.

“It’s clear we’ll have the resources to provide the immediate tax rebates that we’ve already proposed, and protections against five tax and toll increases the Governor is hell-bent on collecting despite an embarrassing $9 billion over-collection of taxes this year,” Senator Sam Thompson (R-12) said. “It’s way past time that tax relief is made a priority — and not an afterthought with whatever nickels are left over.” 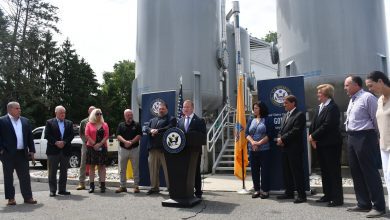