Officials did not release where in New Jersey the deer were found.

SARS CoV-2 has also been documented in deer in six other states – Illinois, Iowa, Michigan, New York, Ohio and Pennsylvania, as part of ongoing surveillance projects.

While the virus has been shown to be prevalent in deer they have not been reported to exhibit any clinical signs, and according to the Centers for Disease Control (CDC), there is no evidence that wildlife, including white-tailed deer, are a source of COVID-19 illness for people in the United States or that people can get COVID-19 from preparing and eating harvested game meat, according to the World Organization for Animal Health.

There is also no evidence that the virus can be transmitted from deer to other animal species, and the virus is not expected to have a negative impact on the overall deer population, officials said.

Sample collection in New Jersey began in December 2021 from deer harvested by hunters from northern, central and southern regions of the State. To date, a total of 398 samples have been collected from game butcher shops in this first year of the anticipated two-year study. Other states, such as Wisconsin have also begun testing their deer populations. SARS CoV-2 has been documented in other wildlife species such as mink, leopard, and in zoo settings in big cats, gorillas, otters, binturong, coatimundi, fishing cats and hyenas, officials said.

The CDC recommends the following hygiene practices for hunters:

These safety practices can reduce risk when handling and cleaning game:

When finished handling and cleaning game:

At this time the NJ Division of Fish and Wildlife is not recommending that hunters have their deer tested for COVID-19. This study is part of a surveillance project to better understand the potential impacts of the virus on animal populations.

The Murphy Administration reminds the public to do their part to prevent the spread of COVID-19 by getting vaccinated and boosted against the virus, fish and wildlife officials said.

County College of Morris receives $172,500 grant to provide no-cost opportunity to prepare for a well-paying career 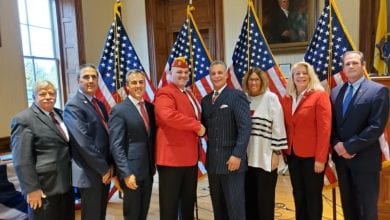