“As soon as Governor Murphy announced that he was mandating vaccinations and taking away the testing option for health care professionals and workers in congregate living facilities, we warned that staffing shortages were an almost certain outcome that he should have a plan to address,” Bucco (R-25) said. “Our warnings were prescient, as nurses, nursing homes, and corrections offices have all echoed our concerns and warned of a looming disaster. Still, Governor Murphy has no plan.”

On January 19, Governor Murphy announced Executive Order No. 283, which requires workers at health care facilities and high-risk congregate settings to be up to date with their COVID-19 vaccinations and mandatory boosters, Bucco said.

All covered workers will be required to be vaccinated and boosted and will no longer be permitted to submit to testing as an alternative to vaccination, except in limited situations, Bucco said.

“Taking away the testing option will be the final straw for many workers who have given everything and complied with all of the nonsensical mandates since the start of the pandemic nearly two years ago,” Bucco said. “The only person who doesn’t seem to recognize that doctors, nurses, and other caregivers are at their breaking point is Governor Murphy.”

Individual nurses who are tired of the Governor’s mandates have said they are ready to quit, while the largest nurses union in the state say the mandate will exacerbate a critical worker shortage, according to NJ.com.

Similarly, NorthJersey.com has reported serious concerns of family members and the operators of nursing homes, assisted living facilities, and group homes for people with developmental disabilities, who have warned that they’re already facing an “insane” labor shortage that will be made worse due to Governor Murphy’s vaccine mandate.

Meanwhile, the New Jersey State PBA, which represents corrections officers in state prisons, is taking the Murphy administration to court to have the order struck down, Bucco said.

As NJ 101.5 reported, the PBA says the testing option has worked to keep prisons and jails “as safe as possible,” while increasing reliance on vaccinations isn’t supported by the science which demonstrates that vaccines “have been ineffective at stopping the transmission” of the Omicron variant.

“Governor Murphy doesn’t know better than the experts in all of these industries who issued warning after warning about his mandates, but he thinks he does,” Bucco said. “As we’ve learned during the pandemic, the governor’s refusal to listen to others is a recipe disaster.” 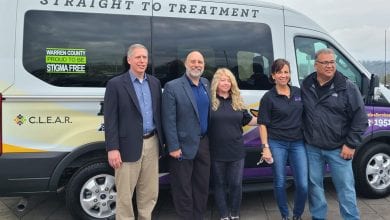 Intoxicated man falls into road, struck by car in Hackettstown