NEW JERSEY – Senate Republican Leader Steven Oroho said it’s unbelievable that the Biden White House refused to condemn the online posting of the home addresses of United States Supreme Court justices for protests that may be planned at the justices’ homes.

“Judges need to be able to do their job of considering controversial issues and cases without fear that harm might come to themselves or their families,” said Oroho (R-24). “The public needs to know that the decisions of our courts – especially the Supreme Court – are based on the impartial application of the law and not coerced through threats of violence.”

The home addresses of United States Supreme Court justices were posted online as pro-abortion activists said they would organize protests at their homes in response to a leaked draft opinion that suggested the Court might overturn Roe v. Wade, Oroho said.

Oroho said, that the New Jersey Legislature took up this exact issue last year after the home of a federal judge in New Jersey was attacked on July 19, 2020, resulting in the murder of the son of U.S. District Judge Esther Salas and the wounding of her husband.

As a result of that attack, New Jersey enacted Daniel’s Law in honor of Salas’ son. The law prohibits disclosure of certain personal information, including home addresses, of various public officials who provide services in the criminal and civil justice systems for this State, for the federal government, and for other governmental entities, Oroho said.

“Given what we so recently experienced, it is absolutely shocking that the Biden White House refuses to acknowledge the risk to both the justices themselves and to the fair application of the law that could result from the posting of their home addresses online,” Oroho said. “I’m asking the Democratic leadership in the State Legislature to post resolutions, in line with the legislation we passed last session, that calls on the Biden Administration to take an unequivocal position opposed to this attempt to intimidate the highest court in the land.”

“The President lives in a fortress and is protected all of the time. The homes of some of our justices have young children in them and are much more exposed,” Oroho said. “The New Jersey Legislature should make clear to the White House that they should follow New Jersey’s lead in making the homes and families of judges and justices completely off-limits.”

Oroho urged Governor Murphy to join him in pushing for these legislative resolutions. 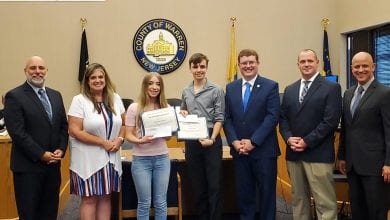 Hackettstown school district to offer free COVID testing to any student, parent or staff member in the district