Somerset and Hunterdon County law enforcement are teaming up with the U.S. Department of Transportation’s National Highway Traffic Safety Administration (NHTSA) for the national “U Drive. U Text. U Pay.” high-visibility enforcement effort.

From April 1 through 30, law enforcement officers from across the country will work together to enforce texting and distracted driving laws to make our roads safer for all road users.

According to NHTSA, between 2012 and 2019, 26,004 people died in crashes involving a distracted driver. While fatalities from motor vehicle crashes decreased slightly from 2018, distraction-related fatalities increased by 10%. NHTSA also reported that the number of deaths linked to driver distraction was 3,142 nationwide, or almost 9% of all fatalities, in 2019. This represents a 10% increase over the year 2018, or 284 more fatalities. The distraction figure was the largest increase in causes of traffic deaths reported for 2019.

Millennials and Generation Z are the most distracted drivers, often using their cell phones to talk, text, and scroll through social media while behind the wheel. According to NHTSA research from 2017, young drivers 16 to 24 years old have been observed using handheld electronic devices while driving at higher rates than older drivers since 2007. In 2019, 9% of people killed in teen (15-19) driving crashes died when the teen drivers were distracted at the time of the crash.

“Distracted driving has become a leading cause of vehicle crashes on our nation’s roads, and much of this distraction is attributed to texting while driving,” Acting Somerset County Prosecutor Thomas Chirichella said. “People know texting and driving is dangerous and often illegal, but they selfishly give themselves a personal exemption to do it anyway, and this behavior unfairly puts others at risk. Beginning April 7, if you text and drive, you will pay,” he said.

Many drivers are guilty of a “double standard” when it comes to distracted driving. In its 2018 Traffic Safety Culture Index, the AAA Foundation reported that while nearly 96% of drivers believe it is very or extremely dangerous to read a text or email while driving, 4 out of 10 drivers admitted to doing so within the previous 30 days.

Somerset and Hunterdon County officials and NHTSA urge drivers to put their phones away when behind the wheel. If you need to text, pull over and do not drive while doing so.

If you are the driver, follow these steps for a safe driving experience: 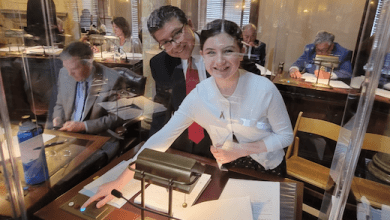 2 arrested during drug investigation in Newton