“The Murphy Administration peddled outrageous claims about the State’s finances over the past year that have proven to be completely false,” Senator Steven Oroho (R-24) said, the Republican Budget Officer. “Going back to last July, we had clear signs the State’s financial picture was better than expected despite the Murphy Administration’s measures that needlessly destroyed so many businesses. The governor stuck by his false projections to secure approval for unnecessary tax increases and an otherwise unconstitutional borrowing scheme to build a massive surplus that he could spend while he runs for reelection.”

In a revenue update to the Budget Committee this morning, fiscal analysts from the nonpartisan Office of Legislative Services (OLS) estimated that State tax collections through March are coming in nearly $3.7 billion higher than Governor Murphy projected when the current budget was approved in September.

At various times over the past year, the governor has said that New Jersey was at risk of a budget shortfall as high as $30 billion due to State revenue losses resulting from the economic impact of the coronavirus.

“Under the cover of the pandemic, Governor Murphy pressured Democrats in the Legislature to pass tax increases, sold the Supreme Court on a $9.9 billion borrowing plan, and pled for billions more from the federal government,” Senator Sam Thompson (R-12) said. “To say that the governor exaggerated the impact of the pandemic would be an understatement of epic proportions.”

Last summer, even after it was clear that tax collections were bouncing back, the Murphy Administration continued to push dire revenue projections to convince the New Jersey Supreme Court to authorize up to $9.9 billion of “emergency” borrowing that otherwise would have been unconstitutional.

Under mounting pressure to acknowledge the State’s improving revenue situation, the governor borrowed $4.3 billion in November after certifying a reduced but still inflated revenue shortfall to the Supreme Court.

Today, a representative from OLS testified to the Budget Committee that the borrowing “was not essential” to balancing the current budget.

“The Court agreed that Governor Murphy could only borrow to replace revenue losses directly related to the emergency,” Testa said. “Today, we’re learning that virtually every dollar of the multi-billion dollar revenue loss that the Murphy Administration projected and certified to the Supreme Court to justify his borrowing scheme has failed to materialize. Unfortunately and likely intentionally, he structured the debt to prevent us from paying it back early once we realized it wasn’t needed to compensate for the ’emergency.’ Our only recourse is to say ‘we told you so’ while New Jersey taxpayers are stuck repaying $4 billion of unnecessary debt with interest for the next dozen years.”

In addition to borrowing billions, the Governor pressured the Democrats who control the Legislature to approve an income tax increase and extend an expiring corporate business tax surcharge last fall to generate even more revenue.

When he delivered his Budget Message in February, Governor Murphy finally admitted that the tax increases and borrowed funds, along with the rebounded State revenues he had long denied, would combine to produce a massive $6 billion budget surplus, much of which he proposes to spend in the new fiscal year that starts in July.

“Instead of helping people and businesses when they were desperate for assistance over the past year, Governor Murphy sat on a mountain of hoarded cash that he kept in reserve to spend in his election-year budget,” Senator Declan O’Scanlon (R-13) said. “He’s proposing to blow out spending at record levels with borrowed, surplus, and federal relief funds, but he’s not telling New Jerseyans the truth that it’s unsustainable. When those funds are gone, don’t be surprised when he calls for more tax increases to sustain the bigger and more expensive government he’s brought to New Jersey.” 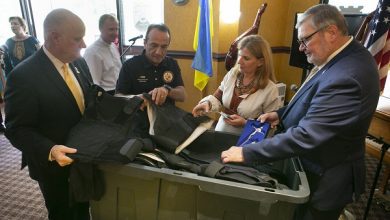