NEWTON, NJ (Sussex County) – The Sussex County Board of County Commissioners spent a considerable portion of their Wednesday night meeting recognizing the efforts of several non-profit groups and volunteer initiatives within Sussex County.

Among the honorees were volunteers at the county’s vaccination site as part of Volunteer Appreciation Month; Ginnie’s House Children’s Advocacy Center for Child Abuse Prevention Month; DASI for Sexual Assault Awareness Month; the efforts of the county’s Municipal Alliance for Wear Purple Day and Alcohol Awareness Month; and the role of Sussex County’s Government for National County Government Month.

Nick Loizzi, the coordinator of Sussex County’s Municipal Alliance, accepted the proclamation for Wear Purple Day, a day set aside on April 16 asking individuals to wear purple to raise awareness about the harmful effects of alcohol. Deputy Director Anthony Fasano presented the proclamation, noting one of every 12 American adults, wrestles with alcohol abuse or dependence, leading to about 100,000 alcohol-related deaths annually. The color purple, Fasano explained, has been embraced because of beliefs in early Greece that carrying an amethyst stone – the word amethyst translated to “without drunkenness” – would guard an individual from alcohol intoxication.

“The focus of our division is prevention of all types of substance abuse disorders,” Loizzi said, citing alcohol the second leading cause of New Jerseyans checking into abuse treatment programs, after heroin and other opiates. “By issuing this proclamation, we are not only recognizing the people who are in recovery from alcoholism, but also the people who need to get into treatment or who may have a problem; and to show support for both sides of that.”

Loizzi asked that Sussex County residents who wore purple on Friday to send photos to be used in a collage of residents, to: nloizzi@sussex.nj.us.

Fasano also read the proclamation for Ginnie’s House, presenting it to the organization’s Executive Director Kristi Young. The proclamation emphasized the need to lift up every child and prevent children from being subjected to verbal, emotional, physical and/or sexual abuse, as well as neglect, which can increase a child’s likelihood to engage in criminal behavior or substance abuse. Young thanked all of the commissioners, especially Herbert Yardley, for his longtime support as a board member of Ginnie’s House.

“It really does take a village to raise a child and I’m so grateful that I get to live and work in a community that understands that we cannot give victims the justice that they deserve, if we are ignoring other injustices,” Young said. “Here’s to a future filled with hope and healing.”

“It’s just incredible and it takes a lot of heart, courage, kindness and support for the people that work there [at Ginnie’s House] to do the needed work that is required,” Yardley said.

As part of recognizing Sexual Assault Awareness Month, Jim Elsaesser from DASI or Domestic Abuse & Sexual Assault Intervention, accepted the proclamation from the commissioners, with Fantasia detailing how New Jersey is home to 1.8 million survivors of contact sexual assaults.

“Survivors are people of all ages, genders, sexual orientations and abilities,” Fantasia said. “Sexual violence impacts our communities, as seen by statistics indicating that 1 in 5 women and 1 in 67 men, experience sexual assault at some point in their lives. We must all work together to educate our community about what can be done to prevent sexual assault and how to support survivors.”

“I’ll echo what Kristi [Young] stated about working in such a supportive and responsible community, that recognizes the needs of our community,” Elsaesser said. “For those who have been silenced and marginalized in so many ways, forgotten and left in the shadows, to have a voice and to hear that voice proclaimed in this setting is truly inspirational and deeply appreciated.”

“The staff operating a vaccination site was just one of the many efforts put forth by county staff during the pandemic, including the maintenance of the county’s transportation infrastructure, delivery of services to seniors and vulnerable persons and providing for the myriad of support functions to meet residents’ needs,” Carney said.

The commissioners thanked the volunteers at the vaccine site, with Julia Gurriell, the County COVID coordinator and Division of Health and Medical Reserve Corps coordinator, explaining the levels of volunteerism at the site. As of Wednesday, Gurriell said 13,340 county residents have been vaccinated to date.

Volunteers, she said, numbering approximately 200 from and outside of Sussex County, have donated approximately 9,000 work hours, with about 25 volunteers at the site daily for sixhour shifts. Some of the shifts have included battling weather challenges, with shoveling snow and even pushing vehicles from snowbanks, as part of the varied volunteer duties. Volunteers have included Community Emergency Response or CERT teams, disaster response crisis counselors, volunteers from the nursing program at the college and many Sussex County residents donating food and beverage items to the volunteers, who Gurriell said have “volunteered in their own way, helping out at the site.”

“Volunteers are one of Sussex County’s greatest assets, in that they are dedicated to helping others and unselfishly, give their personal time to make a difference,” Yardley said.

As part of the board’s moment of silence at the beginning of the meeting, the board recognized Chris VanderGroef, a dedicated volunteer past Chief and past President of the Beemerville Fire Department who passed away following a brief illness on April 2. The board also remembered Deputy Director Kenneth “Kenny” Armwood, of the Middlesex County Board of County Commissioners, who died suddenly at the age of 46 on March 29. Carney stressed the importance of Armwood’s valuable contributions to Middlesex County in his comments, beginning with his start on the Piscataway School Board at 19. Armwood was the first AfricanAmerican Deputy Director of Middlesex’s Board of County Commissioners.

Carney also recognized volunteerism in another way, praising the Sparta Township Council’s proclamation for Donate Life Month in March. This topic touched Carney personally with a friend of his in need of a liver transplant. Carney cited TAP into Sparta’s article about the topic, which indicated one organ donor can save the life of eight individuals, with 107,000 men, women and children in the country on the transplant list. Carney also noted that in 2020, the donor registry jumped 14%. He said residents can visit www.njsharingnetwork.org for more information.

Fantasia lastly asked Hunter Space, a captain of the Wantage Fire Department, about his volunteer efforts in amassing a tractor-trailer-sized donation of hundreds of thousands of dollarsworth of fire gear and equipment, donated on behalf of fire departments from New Jersey, New York and Pennsylvania, to Alabama fire departments, after a series of tornadoes destroyed many communities in that state. 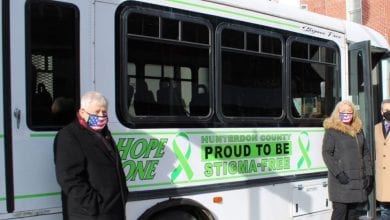