NEWTON, NJ (Sussex County) – For some, graduating with a college degree is equivalent to being in a pressure cooker, especially when those last-minute papers and projects are due. Not so, for Sussex County Community College (SCCC) graduate Matthew Danielson.

No one would have blamed Matt if the pressure were too much. After all, the Andover Township resident not only graduated from SCCC this May with an Associate in Science degree in Business Administration but on June 18, he graduated high school from Sussex County Technical School (SCTS).

“I felt some pressure,” Danielson said. “Pressure does not deter me, but rather inspires me to push forward and motivates and drives me to reach my goals.”

“My double graduation is something I am very proud of,” Danielson said. “There was some disappointment as I was not afforded the opportunity of partaking in on-campus classes.”

That would have been nice, but in any case, he was not going to be sidetracked in pursuing the end game.

“My goal was to graduate with my associate degree prior to my high school graduation,” he firmly stated. “I kept on track by completing several summer courses.” However, he added, “the Jump Start program afforded this opportunity not only for the educational value but the substantial savings on tuition.”

It is estimated that by taking college courses during high school and at SCCC, Danielson’s family saved thousands of dollars in tuition and fees.

Danielson had the full support of his parents, which helped a lot.

“My parents were very inspirational in keeping me motivated and were always supportive,” said Danielson. “They never once told me I was taking on too much. On the contrary, they thought it was inspirational for others to see that anything is obtainable when you set your mind on something. My friends thought I was a little crazy for doing this as my free time was taken up due to ZOOM classes and college work. But the end result is something I would not change.”

His high school counselor, Bina Varkey, was not surprised that Danielson reached his double graduation goal.

“Matt committed himself to his academics which is demonstrated in his earning both a high school diploma with a 3.9 GPA and an associate degree simultaneously,” said Varkey, also a co-advisor with SCTS’s National Honor Society and National Technical Honor Society. “In addition, Matt was an active member of both NHS and NTHS. In addition, Matt’s community service plays an integral role in his life, which speaks to his strength of character.  He is a leader who constantly exceeded my expectations. We are so proud of all he has accomplished!”

Danielson does not spend all his time doing homework and attending classes, though. He is a certified firefighter with the Andover Twp. Fire Department after successfully completing the accelerated program at the Morris County Public Safety Training Academy. He was ranked #11 in the NJSIAA for his bowling accomplishments in 2020, and was a member of the school’s bowling team (four years), the last two years as captain.

This fall, Danielson will transfer his 60 credits into a bachelor’s degree program at Centenary University. He also earned himself a full academic scholarship through a Founders Scholarship. His future plans are to pursue his master’s degree in accounting.

Some people wither when the pressure hits. Danielson thrives.

To learn more about the Concurrent classes and the Jump Start program at SCCC, visit sussex.edu/admissions. 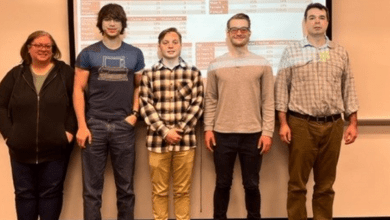