WASHINGTON D.C. – A Sussex County resident was arrested Friday in his alleged connection with the Jan. 6 riot at the U.S. Capitol building in Washington, D.C.

Scott Kevin Fairlamb of Stockholm was charged with certain acts during civil disorder, assaulting a federal officer, knowingly entering or remaining in any restricted building or grounds without lawful authority, carrying a dangerous weapon, violent entry and disorderly conduct on capitol grounds, according to the United States Attorney’s Office.

An arrest affidavit stated a concerned citizen submitted a video to the FBI, which captured a white male in a brown camouflage jacket, later identified as Fairlamb, shove and punch an officer on the West Front of the Capitol.

A second concerned citizen submitted a video to the FBI, which was a Facebook post from Fairlamb’s account. In the video, he is carrying a collapsible baton and says profanities. The citizen identified the man in Video 2 as Scott Fairlamb from New Jersey and stated he recently deleted the videos he took entering and inside the Capitol and that video was the only one that remained on his Facebook account.

A third concerned citizen submitted a video to the FBI, which depicted Fairlamb standing on the scaffolding erected on Capitol grounds. The scaffolding was located at the western front face of the Capitol building.

Another concerned citizen identified the man on the scaffolding as Fairlamb. The citizen stated he/she grew up with Fairlamb, and that he lives in Butler, NJ, and has an Instagram and Facebook accounts. The citizen stated Fairlamb made a video of himself saying they are going to disarm them and then storm the capital.

A video clip depicted Fairlamb picking up a baton from the ground just after the skirmish line on the Capitol West Terrace was breached and putting it under his arm. Another clip depicted him exiting the Capitol building and coughing after chemical agents were deployed inside.

The FBI utilized various investigative methods, including law enforcement database searches, FBI personnel confirmed that Fairlamb has a registered driver’s license with the New Jersey Department of Motor Vehicles and the residential address listed on his license is Stockholm, New Jersey.

The FBI reviewed images of Fairlamb in the videos and the officer’s BWC, and compared those photographs with his driver’s license photo. The FBI agent believes that his facial features in his driver’s license photo match those of the individual in the videos and the officer 1’s BWC, and that they are the same person, the affidavit said.

In addition, the FBI agent compared the tattoo on Fairlamb’s left hand from a video posted to his Facebook account with the videos and believes they are the same person, the affidavit said. 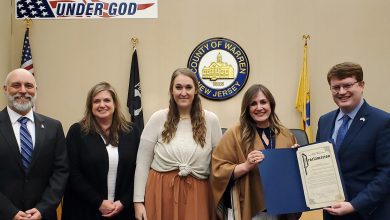