NEW JERSEY – Saying it’s clear that New Jersey Treasurer Elizabeth Maher Muoio intentionally misled legislators on behalf of the Murphy administration to hide the state’s rapidly increasing debt, the Republican members of the Senate Budget & Appropriations Committee repeated their calls for the treasurer to be held accountable by the committee in a letter Wednesday to Senate Budget Chairman Paul Sarlo (D-36).

The Republican senators also said the Treasurer should be called to respond to serious allegations raised Wednesday by Bloomberg that the Murphy administration deliberately looked the other way as a state vendor took tens of millions of dollars from the state despite failing to meet its contractual obligations to help lower health care costs.

“At the same time that Treasurer Muoio was telling legislators that New Jersey’s debt had decreased to a seven-year low, her department was preparing to release the long-overdue state audit showing that debt actually climbed by $44 billion in a single year,” said Senate Republican Leader Steven Oroho (R-24), a member of the Budget Committee. “It’s clear the Treasurer knew her prepared testimony to our Budget Committee was grossly inaccurate. She must be called to appear before our committee to be held accountable for misleading the Legislature in what appears to be an intentional way and to address allegations of serious fiscal mismanagement by the Murphy administration.”

In testimony submitted to the Senate Budget & Appropriations Committee on May 16, Treasurer Muoio said, “we have substantially reduced our debt load while securing real savings for the taxpayers of the state.” She continued, saying, “In fact, the State’s current debt load is now lower than it’s been at any time since FY 2015.”

On May 25, just nine days later, the Treasurer signed and released the Annual Comprehensive Financial Report for FY 2021, commonly referred to as the “state audit,” which contradicts her testimony to the Legislature.

“It’s unconscionable that we were provided information by Treasurer Muoio that was flat out wrong, and it seems certain she knew it was wrong since the audit with the true numbers was about to be released,” said Senator Declan O’Scanlon (R-13), the Republican Budget Officer. “This wasn’t just stretching the truth or leaving out facts that are unflattering to the Murphy administration. This was a deliberate attempt by Treasurer Muoio and the Murphy administration to hide New Jersey’s exploding debt from the public and the Legislature. To make matters worse, we’re now learning that the administration is failing to properly manage contracts that could stop health care related debt from growing even higher.”

“Governor Murphy keeps saying he’s responsible for fixing the pension system and cutting public employee benefit costs, but the numbers tell a different story,” said Senator Sam Thompson (R-12), a member of the Senate Budget Committee. “He’s trying to weave a narrative to prepare a presidential run without actually doing the work of lowering costs for New Jersey taxpayers now or in the future. In the process, his administration is hiding information that the Legislature needs to do the hard work that he has failed to do. That’s not something we should tolerate.”

According to The Record, a 2020 health benefit reform enacted by Governor Murphy that he said would lead to massive savings has backfired and is driving up costs for many school districts and property taxpayers.

Further, Bloomberg reported Wednesday that the governor’s office pressured state officials to stop an attempt to claw back tens of millions of dollars from the insurance company that manages health benefits for state workers after the insurer failed to deliver a contracted program to help employees find better care at lower costs.

Senator Michael Testa (R-1) said these Murphy administration failures and the Treasurer’s misrepresentations are important to address since out-of-control health care costs contributed $12 billion to the $44 billion increase in the state’s long-term obligations.

“I think there should be consequences when a member of the governor’s cabinet fails to provide truthful testimony to the Legislature,” said Testa, a member of the Senate Budget Committee. “We should hold her accountable for lying to us and for failing New Jersey taxpayers so miserably. I won’t be surprised, however, if the Democrats who run the Legislature continue to cower in fear of the Murphy administration and let Treasurer Muoio get away with it. Ultimately, it’s taxpayers who will pay a greater price if we do nothing.”

Prior to Wednesday’s letter from the four Republican Budget Committee members, Testa made two prior requests for Treasurer Muoio to be called to appear before the Budget Committee with no response from Senate Democrats. 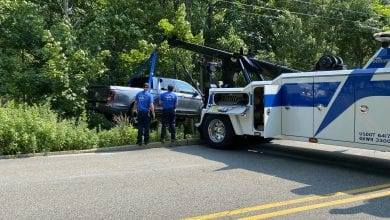 Man crashes pickup into stream, flees the scene, later arrested for being under the influence of CDS in Hackettstown (PHOTOS)